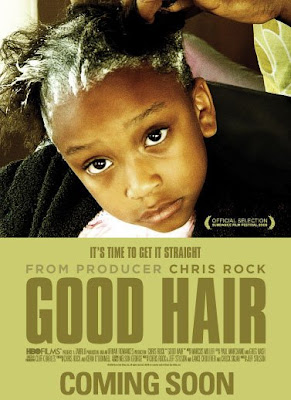 I just saw this ‘ROCumentary’ on black hair, by Comedian/Actor Chris Rock. I expected hard-hitting comedy, but what he served up was more thoughtful, and interesting. Along with his usual wit, Rock exposed a side of black America seldom seen – the side where blacks wrestle with their identity, win a few rounds, but ultimately lose the fight.

The movie serves as empirical evidence to much of what I have presented about hair in the Black Women Series (here). The bottom-line is that black women spend a tremendous amount of money, estimated at $9 Billion/year, trying to make their hair look ‘good’, or not kinky. This effort is in deference to the much-maligned, but still-embraced, Eurasian beauty standard of long, straight hair.

The attachment of black women to their pursuit of good hair is likened, by the women themselves, to a drug addiction. But what is left out, besides burned hair and scalps, poisoned lungs, and disappointment, is the devastating opportunity cost. A large portion of this money could certainly go to truer essentials, like education, fitness, savings, homeownership, debt-avoidance, etc. Instead, the money stuffs the pockets of companies, predominantly white and Asian, only too happy to help blacks look more white/Asian.

Rock also explores the world of hair weaves, including the trafficking of human hair between India and the US. Again, we hear from women so desperate, that they place hair costing thousands on monthly installment plans, while professing that they would go hungry before missing their hair appointment. Rock also exposes the burden, for black men, in dating these self-proclaimed ‘high-maintenance’ women, who expect committed mates to pay for these expensive and temporary hair enhancements.

The most poignant portions of the movie are the segments between Rock and Rev. Al Sharpton, where the chemically-straightened Rev. admonishes black women for placing their vanity ahead of necessities, their own and their children’s. Sharpton’s hypocritical presentation of advice, relative to his James Brown-inspired coif, makes the whole crazy thing believable, and very authentic.

The final cost, again left unsaid in the show, is the physical damage pressing, relaxing, and weaving, does to natural hair and the fitness of black women. This expensive styling results in damaged and shorter hair, pre-mature baldness, less fitness activity, and ultimately less attractiveness. The maintenance of these expensive hairstyle conflicts with jogging, swimming, aerobics, cycling, and any other activity that produces healthful sweating or wet hair. Obesity among black women is epidemic and hairstyle-influenced sedentary levels go to the heart of the issue.

Rock, who deserves credit for wading into these treacherous waters, avoided many of these desperate truths, perhaps for the sake of his own standing with black women, but at what cost?

i havent seen it yet but i wanna take my daughter. she doesnt have perm and i told her mom NEVA to do that to her hair. I really wanna educate my "boo boo" (sorry das her nickname).

Wow, talk about perpetuating stereotypes. Learn to write and speak like an educated human being.

Please check out my BLACK HAIR documentary at http://www.blackhairdvd.com

Someone needs a lesson in Acting Right.

Check out sungod's blog for more shining examples of striking illiteracy. Valuable insight into the minds of the left side of the bell curve can found there.

Mr. Collier
This is one of those occassion I have to whole hearten agreement of your review of Chris Rocks film, sista are in denial of cultural and economic ramifications of the hair issue, but advise that hair like shoes are accessory...and this is not a issue of self loathing!

Valuable insight into the minds of the left side of the bell curve can found there.

We don't believe in no bell curve around here!

The pursuit of straight hair is really no different than the similar pursuit of curls, as attractiveness is an instinctive do or die competition (unfortunately). The irony is how said expensive mimicry is counter-productive, as it ultimately inflames unattractiveness.