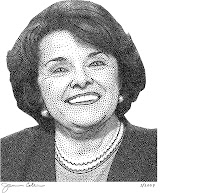 Obama is getting his first of many lessons in how to be president. It’s not about race, but rather about power and respect. He ignored Feinstein, Chairwoman of the Senate Rules Committee, in his announcement of Panetta for Director of the CIA, and now she wants him to know that such slights will not go unpunished.

By reversing her earlier position with her fellow Democrats and the President-elect, against seating Roland Burris as newly appointed senator from Illinois, she is sending a message to Obama, his staff, and the other Dems, that wonder-boy puts his pants on just like everyone else, one leg at a time. She has no reason to side with Burris, who belongs nowhere near the Senate behind the antics of Gov. Blagojevich, but she has a point to make.

Politically, it is good for Obama to get his first whupping early and with a soft glove. Burris is nothing. Hopefully, this is all it will take for team Obama to forget all the press clippings of his greatness, and get down to brass tacks. This country needs fixing in a hurry, and we can ill-afford the wasted time and energy of power-politics among people who profess to be on the same team.

There are many who are itching for Obama to fail: I am not one of them. But indeed he will fail if he, or the others around him, thinks that race will, in anyway, carry or shield him through the tasks ahead. For a moment the voters looked pass race, or perhaps they saw something that scares them more. Who knows. Regardless, we need to forget race. All that could have been proven about race and politics is now gone - invisible does not mean impossible. It is a contest for leaders. Whoever makes the fewest dumb mistakes, while catching whatever breaks come along, wins.

I didn't see Feinstein's move as anything to do with race but just someone who's very logical. She was right on Burris and on her issue with the CIA pick - Obama's camp should have informed her; afterall, she's over "Intelligence."

He should watch out messing with a rich jew whose husband makes big bucks out of Iraq war.

President Elect Obama understands racial politics better than any other politican I have seen in the post civil rights era. While strides have been made, you best believe that harsher judgement will be made on Obama based on race. (NOTE: I DO NOT BELIEVE THAT FEISTEIN WAS RACIALLY MOTIVATED.) It's amazing to me how many whites have already blamed him for the state of the economy despite the fact that he has not made or signed one piece of economic policy yet. Unfortunately because of his race, he will have to over perform just to give himself credibility. Don't worry, Obama has never hidden behind racism, but he understands the pervasive role it continues to play in his political career.

Hey Jim, how are things in Oakland? I hear that there's a bit of action on the streets.

Geez Dennis, I wondered why the helicopters were buzzing last night. I guess I should turn on the TV once in a while. I'll post up after dinner and a shot of vodka (for taste). Where's the pause button for civil unrest?

Saw what happened in Oakland. A shame. But what a real shame is is how many people are murdered by gangs and apparently the citizens give that a free pass.
Don't ever see any protests (riots) over those lost lives.....