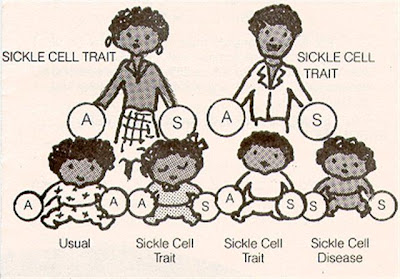 When I was a child, the family two doors away had three kids, two boys and a girl. One of the boys, Darryl, had sickle-cell anemia and died painfully before we completed middle school. The other two kids had challenges from carrying the trait, but nothing matching their departed sibling. The tragic results for this family naturally followed the coupling of two people who, unknowingly, carried the genetic trait for the disease.

Three points worthy of note. The advancement of scientific study in genetics is directly responsible for us now understanding what exactly happened to Darryl and why. The screening and counseling of black couples beyond the shores of Africa, contemplating children, reflects both science and philosophy that seeks to protect families from the physical and emotional suffering that my childhood neighbors endured. Lastly, the Eugenics movement of the 1900's that pursued the philosophy of a master-race was a crude and vicious response to scientific discovery, apart from the science itself, and should not be confused with the benefits of scientific advancement.

Sterilizing people by force was bad. Forcing other to have children, against their will, was equally bad. Counseling people on the likely outcomes of their offspring is very good. These behaviors eminate from scientific discovery following knowledge. Eugenics of old is dead, and should stay that way. However, the physical and emotional needs of humanity demand that we pursue our understanding of DNA, genetics and heredity. The yellow crime tape surrounding the discussion of the role of genes in our lives needs to come down.

I am not AGAINST any kind of study!

Studying genetics IS one thing, making empirical connexions between genetics and generalizing physical or emotional characteristics is ANOTHER thing!

...
The word genetics is used very narrowly (Plomin et al., 1990). It is critically important to recognize that behavioral genetic research is limited to the investigation of the genetic and environmental origins of individual differences within a species, not species-typical development. Genetic research focuses on DNA differences among individuals, not the vast majority of DNA that is the same for all of us
...


Questioning genetic intelligence is not racism By JAMES WATSON

...
One in three people looking for a job in temporary employment bureaus in Los Angeles is a psychopath or a sociopath. Is this a consequence of their environment or their genetic components? DNA sequencing should give us the answer. The thought that some people are innately wicked disturbs me. But science is not here to make us feel good. It is to answer questions in the


Intelligence
To study the interrelationships among intelligence, race, and genetics, we need to know what intelligence is. We do not know. Hence, any conclusions about its relationships to other constructs will be, at best, tentative.

Sorry for IT being BIG.

My niece now is a carrier because of her father passing it down. I don't believe it's a bad thing for someone to warn someone if they are a carrier so a certain horrible outcome will not come into existence. I just hope they find a cure in due time.