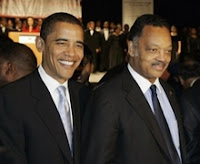 Jackson Criticizes Obama (for acting like he's white) - The State

Now hold on Reverend. First you endorse the guy for president and then slam him for acting white! What gives? It seems that Jesse thinks Obama’s reaction to the Jena Six prosecutorial debacle is too tepid for his taste. Barack’s statement that “When nooses are being hung in high schools in the 21st century, it’s a tragedy,” was not good enough.

Jesse went on to say, “If I were a candidate, I’d be all over Jena”. No surprise there, but this would be from a man with less than a snowball’s chance in hell of actually winning. Going to Jena for Jesse is all about guilt-leverage to extract ‘blood’ payments to his Rainbow Coalition initiatives, as he has been doing for forty years. Perhaps the nuance in practice here is that Jesse did not say, “If I were a viable candidate…”.

Along with comments like Obama’s and those of other prominent leaders, the real pressure comes from the spotlight of the various media letting all the world see just how far off-track racial sanity can still go here in America, even after the Duke scandal. Whether it is newspapers, radio, television, or the internet, there has been an invaluable stream of coverage and scrutiny on Jena, with plenty of stupid-blame to go around. And what is it with prosecutors in the South, anyway?

As for the Reverend’s accusation of Barack acting white, Jesse definitely knows how to tee-up the headlines and insure that that the cameras and microphones point to him for some tasty morsels to feed a slime-hungry public. I do not think he means this accusation for one second, rather it is just one opportunistic black civil-tician grand-standing the race card with a twist of lime, to advance his agenda.

I just heard about Jackson's comments a few moments ago on MSNBC. I was going to put a post on my blog about it ... but, I see that you have covered the issue much better than I would have done. Well done. Jesse needs to check himself on this one...

“I reaffirm my commitment to vote for Sen. Barack Obama. He has remarkably transcended race, however the impact of Katrina and Jena makes America’s unresolved moral dilemma of race unavoidable. I think Jena is another defining moment of the issue of race and the criminal justice system. This issue requires direct and bold leadership. I commend Sen. Obama for speaking out and demanding fairness on this defining issue. Any attempt to dilute my support for Sen. Obama will not succeed.”

This was in a release by Jackson saying he was misquoted about his remarks on Senator Obama.

The Stepfather of Soul said...

I have to mirror Villager's remarks, because I was going to write also on this topic on LJ. I really think part of the problem here is, in addition, to Jesse's usual desire to seek the spotlight, Jesse's resentment (mirrored by Al Sharpton) that Barack has not propped them up as "advisors," be it of the political or spiritual variety.

Jinkees all this Black in-fighting and snarky remarks. That doesn't do anybody any good. It makes the good Rev. Jackson look like a misbehaving child--yes I have 4 so I count myself as an authority on misbehaving children. I do think that they (Re. Jackson & Sharpton) would do well to rally behind Mr. Obama in the same fashion that have rallied behind others who have paid lip service to our community. I think Mr. Obama has an excellent chance and I think the Black community could come out in numbers. I know the barrel is nearby and if we're not careful, the crabs will grab hold...again.