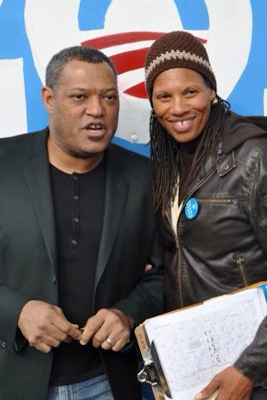 There has been much talk on the losing side of the presidential election about the Obama “Ground Game”. By example, losing VP candidate Paul Ryan (R) of Wisconsin focused (here) on what he called “record-breaking turnout numbers from urban areas”, code for black votes, as the reason for the Romney/Ryan pounding at the polls. What about the battleground states, like Colorado, Iowa and Ohio, that were mostly rural and/or white?

So now, about this Obama Ground game - was it a “fair and square” win as Ryan back-tracked, or something more sinister, as offered by Republican strategist Karl Rove, who stated (here) that “Obama won by voter suppression”, clearly an act that, if found to be true, would be illegal? For the record, Rove has yet to back up his allegation with anything resembling evidence.

Moving along, I dug deeper into the Obama Ground Game, with a reputable source – my retired sister Karen, an Obama volunteer from the trenches in the battleground state of Colorado, (she is pictured here with Obama volunteer/actor Laurence Fishburne, aka Morpheus from the Matrix series).

It seems that over the past months Karen has been phone-banking (calling); canvassing (walking door-to-door); registering and otherwise educating goo-gobs of people as to why they, within her assigned territory, should vote for Obama. She pursued Blacks, Whites, Asians, and Latinos, without distinction. She did this during the day, evenings and on weekends. She said there were thousands like her all over the city, counties, and the Columbine state. Each volunteer was prepped to get people to act their support of the President.

All the way from Bill Clinton holding a pep rally for volunteers at Manual HS, to actress Angela Bassett (What’s Love Got To Do With It) cheering on N.E. Denver precincts, to comedian/actor George Lopez working West Denver, and actor Jon Hamm (Madmen) in North Denver, the Obama machine left no motivating stone unturned or potential vote uncast. Fishburne not only 'bumped' the troops in the precinct offices, the actor was spotted hawking votes door-to-door in the eastern suburb of Montbello.

On election day, Karen was picking up and delivering sealed ballots from people she had earlier convinced to sign up for mail-in-ballots - but who had not mailed them. She drove people to the polls and back, when a ride stood between them and voting. The volunteers gleefully called this the knock-n-drag - knock on the door and drag them to the polls to vote. All of this was done on her time and dime – no reimbursement. She said people liked Obama over Romney when you lined up their positions, but the key was getting them into action - to vote. “That’s what our ground game did – that’s how we won!"

I was surprised that it wasn't a wider margin of victory. In 2008 Obama was good in getting out the vote. In 2008 wa can't forget the Palin factor and even though McCain was less of a liar than Romney he still got spanked.

Lyin Ryan was not the train wreck that Palin was in the brains department but Lyin Ryan could not even win his home state.

It looks now that the only reason the Rethiglican will cooperate is to survive.

I hope that people see that this is less about right vs left because there really is no left right. Obama's policies have been more conservative than Reagan's same as Clinton's. When we go back the the Clinton tax rates we will have prosperity. This is about right vs wrong and fair vs unfair. The president delivered that message while the GOP was compaigning on Fantasy Island.

The one single thing that really turned me against him was when the superpac put out the ad about Romney and Bain so called killing the guys wife with cancer. CNN checked the time line and it was absolutely no such thing.

Obama could have garnered even more votes by denouncing that ad, and did not. He has no qualms about letting people lie on his behalf.

All these boo hoo hoo bitter sore loser white men complaining can only blame themselves. They need to STFU and take respnsibility for thier own incompetence and stupidity. If the GOP really wants to compete then they must jettison their racist white supremacy philosophy and reach out to black America. But I won’t hold my breath for that.

Reach out to black America? Of course they have to have food stamps, welfare, and medicaid when they reach so blacks can take care of the 73% of black babies born to unwed black mothers as of 2010.

Not to mention the 42% born to the rest of the country's unwed mothers.

It is a gimme gimme give ME country and that is what got votes.

President Obama won because the media in this country drive the narrative. The media has convinced the majority of the voting population that Republicans are racist. Once need not prove another is racist... one need only constantly repeat it until it becomes so.