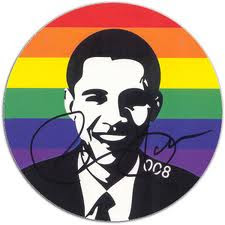 When I first heard that President Obama was coming out in support of same-sex marriage, I thought for once that he was playing it 'straight', so to speak - but no such luck. I say this because the president added the caveat that laws granting this 'civil-right' of union, should be left up to the states. Say what?

As a constitutional scholar, Mr. Obama knows too well, after studying Brown v. Board of Education (desegregation), that state implementation of civil-rights protection is a dog that does not hunt. In other words, he knows that gay marriage left up to the states does not stand a chance in hell of becoming a right, by law. His Harvard legal education showed him, in no uncertain terms, that when the Supreme Court, under Justice Earl Warren, handed-off the implementation of their landmark rebuke of 'separate but equal' (Plessy v. Ferguson) in 1954, it took the states another twenty years to make it a reality. Even then, desegregation occurred amid street battles. To hear former NAACP lawyer and Justice Thurgood Marshall tell it at the time, the Warren Court was being purposefully "S-L-O-W" in handing their desegregation decision to the states, as I believe is Mr. Obama in his caveat-ed support of gay marriage.

Obama is denying what he knows - that it is the role of the federal government, as outlined in the constitution, to defend the civic-rights of every citizen (including equality under the law), particularly when individual state pursuits might abridge such rights. In true political slight-of-hand, Mr Obama is looking for voter credit, for gesture over real substance, while giving the politician's wink/nod to anti-gay factions that know history, especially those folks in the South.

Thurgood Marshall is certainly shaking his head, somewhere in the after-life, and maybe wishing Obama had attended Howard Law (Marshall's alma mater), rather than Harvard.

But, so many people he is hoping will vote for him do not even realize that he added that caveat.

They think he is going to push for a national law just because he said he is not opposed to gay marriage.

These are the same people who think that the President controls law making as well (rather than the 535 voting members of Congress).