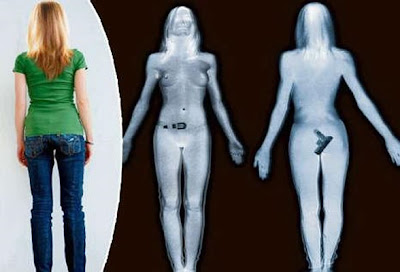 I had to fly to Chicago for a meeting last week, and as luck would have it, I was singled out for a full security going-over, courtesy of Oakland TSA officials. With this selection, I had the choice of the default full-body scan or the alternative ‘pat-down’. Of course, all the propaganda I had read and heard said that the body scan delivers a low level of radiation and is entirely safe. But, I also witnessed the pilots throwing fits over these things, along with the feel-my-crotch pat-down back-up. So what to do?

Although I opted for the scan, I wondered, as I stood there getting zapped, if I need to up my daily dose of Vitamin D, to give my body some extra cancer fighting moxie, in response. Well, the answer I came up with in my uninformed mind was wrong – after reading the article I have attached (here). I now think these machines could be very dangerous and they should be avoided.

Frankly, I would prefer stripping down to my underwear for a visual inspection, rather than getting irradiated or molested. I think some intrepid fashionista should come up with security underwear that is comfortable to fly in, not too revealing in a same sex security area, but also security-friendly. Until then, I will opt for the grope and avoid those questionable, allegedly safe, surface radiation gizmos. I suggest y’all do the same. Happy Thanksgiving!

P.S. I chose this particular scanner image because the other images I found were so so unappetizing, equally pornographic, and we should know what those TSA guys are seeing, or not.

7/20/2011 UPDATE: TSA has begun implementing a software update that shows agents a generic picture of subject passengers, including any suspicious anomalies. Note that this change does not mitigate the health and safety concerns of the scanners.

1/26/2013 UPDATE: TSA announced (here) that it will eliminate use of the at-issue Rapiscan machines, replacing them, by June, with machines using ATR (Automated Target Recognition) software.

Supposedly, the picture you have is a Photoshop of a nude woman with weapons added, not a real device image.

The canonical 50s and 60s TV image of an oppressive regime was "Your papers please". Now, we're strip-searching 6 year olds and wanding nuns. The insanity is way too much.

Thanks KY. Yeah, the hair made me suspicious, but it is representative nonetheless (IMO), and a damn site easier on the eyes than a shot of the average American trekking through O'Hare.

Robert Heinlein wrote a sci-fi novel called "The Puppet Masters", which was a sort of invasion of the body snatchers story.

Alien invaders could take over humans, but they would attach to our bodies underneath clothes. To fight them, humans had to first wear nothing but swimsuits when in public, but then the aliens adapted and hid under swimsuits, so then it was all-nude all-the time in America- this was code-named "Operation Sunburn".

Just between you and me, I will wear nothing but my Speedos to the airport from now on so as to avoid the indignity of the scan and patdown

What a choice: get zapped with a "safe" dose of radiation or get felt up. It's frustrating that these are the measures we have to take for safety. I wonder how "safe" those scanners are if you're a frequent flyer?

I found this video today about how to protect yourself from the radiation. Here it is:

A company has designed a line of underwear to help people fight the new TSA screening policies. Willie Geist has the story.

yea yea but ur the same mofos that will heat a biscuit in the microwave quick lol. anyway lets see the knife or the dagger hmmm.."feel me up b4 u go go"!!!! i really dont see another alternative at the moment if its is helping with security then itz cool i guess though i havent been subjected to the "pat down" procedure yet just hope Hally Berry is the TSA lady lol

If I were a TSA worker, I'd verbally and visually verify that you are the James C. Collier, and gratefully let you through. But I'd understand if my female colleagues wanted a body scan...

Since as you say the run of the mill scan is nothing to look at I wonder if it's the TSA agents that aren't being abused rather than the ones being scanned!

On a more serious note, the people screaming the most about the scans and searches are the same ones that will scream the most saying the TSA failed and didn't do ENOUGH if a terrorist is missed and is successful with an attack.

This image is a photoshop fake. The real images look nothing like this. Check out wired.com for some examples of the real ones. They look like amorphous images that look nothing like a naked person. This image was designed for no other purpose than to scare people into thinking the TSA folks are looking at more than they really are. You should be ashamed for promulgating such ridiculous propaganda. Make your case with real facts, not false rumors.

Anon 7:37. Propaganda my butt. The article I linked was about health concerns presented by medical doctors. Pull your head out.