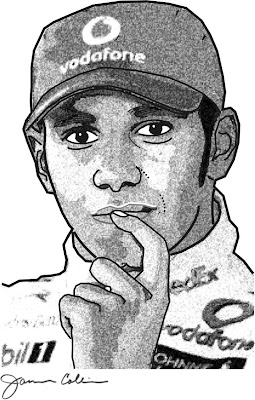 The BBC did a special on Lewis Hamilton a while ago which charted his journey to F1. The most striking thing about him was that like Tiger Woods, he had a black father who was actively involved in his life ... and when I say active, I mean ACTIVE and this was in spite of the father being divorced from the mother.

Apparently Lewis was (still is) a tiny kid for his age, had poor self-esteem and was bullied at school. Well, the dad wasn't having it and enrolled him in a karate club. As he worked his way up to black belt his confidence grew as did his ability to take care of himself at school.

Also, because the father was involved he noticed the young Lewis's interest in and dexterity with model car racing, which grew out of his watching F1 on t.v with his father. The father made him a deal that if he worked hard in school during the week, then he would take him to the track and he could spend his weekends indulging in model car racing.

All along the way, Lewis Hamilton's father has been by his side supporting and encouraging him. The documentary is just heart-warming and a real testimony to the importance of great parenting.

Both Tiger and Lewis have a certain inner strength and grace under pressure and I can only assume that some of that comes from growing up with such intense and unconditional love and support from their parents, particularly their fathers.

When I read this line in your post, "For their part, the Spaniards are claiming no ill intent, saying that they make fun of everyone, and being black is no different than being fat or a women." I exclaimed, "What?!"

How backward is this world that we live in today?!

Thanks for the F1 insight. It is a sport that blacks could excell if given opportunity