Scientist's Remarks on Blacks Cause Furor 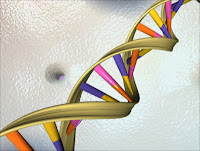 Furor indeed! I’m incensed. Well, maybe not that mad, but I’m still pretty po’d. How could one of my boyhood heroes say such a stupid thing. After all, the discovery of DNA, the instruction set to the human body, was revolutionary to human science and defined my ninth grade experience, 36 years ago.

But wait a minute, the emeritus Watson is 79 and prone to say stupid things for quite some time. Now I can recall that my Dad said some pretty crazy things prior to and certainly once he got into his seventies. In fact, once I know a person is beyond seventy, I expect them to say crazy things. Additionally, if that person is front-loaded with a Nobel, I know that I am likely to hear some serious contradiction.

At his age, Watson can easily confuse the world he started in and the one that is about to consume him. He can do this daily, weekly, or monthly, until he takes his last breath, and particularly when someone sticks a microphone in his face or quotes him for publication. I think the people who care for and depend on him should have better judgment in what circumstances he is placed.

It makes sense that Watson is not claiming to be misquoted, but rather simply cannot understand, with refection, how he could say the things attributed to him. It is called senility people. Get ready; it is coming for all of us.

To be clear, Watson’s statement on black v. white intelligence was better left for a proper debate on testing validity. He is revisionist on his assumed equality in ‘white’ social policies of the past or present. Leading countries have continually sought and exploited disparities of less advanced groups at every turn.

But let’s save our energy for leading science, and properly ignore this old man who has contributed much. Hopefully his caretakers will begin to do a better job. I felt the same way when Andrew Young derailed on Korean store owners in Atlanta a while back. We will all eventually get to a place where we say stupid things. We can only hope that we have something of equal or greater value to offset the inevitable symptoms of the ravages of time.

The support he's received has not been from the scientific community. It's been from racists looking to use science to validate their hatred and ignorance.

Well said and so true. My FIL is 76 and some of the stuff he says floors me. Age does a number on people(...no pun intended...)

ummmm, I beg to differ; boyfriend didn't just get those ideas, he's had them all his life; age just let them slip out of his lips. You don't all of a sudden come into thoughts like that.

I can't help but disagree with your senility-defense of Watson's comments. It's my understanding that he is still very much active in at least the discussion circles of genetics. That defense can't stand if such is the case. Let's just agree that it's easy to find "proof" of the things you already believe, and Watson grew up in a different time and is still his Father's son, and a product of that generation...

Dr. Watson does not deserve a pass with regard to his comments on the basis of his advancing age. The man is an active scientist and a Nobel Prize winner. His statement that he can't believe the words that came from his own mouth are simply a lie. No one is writing off everything else in that interview as senile rantings, why would you pull out this bit about black intelligence as though somehow he became a senile idiot at that moment. For years the man has been associated with a think tank that pursues "evidence" of racially based inferiority on the part of non white groups in order to inform and support public policy regarding them. He has made no mistake here and his statements were clear cut, lucid and entirely consonant with past statements, longstanding professional associations and prior research he has been involved in. Let the man be responsible for his thoughts and deeds. - Aaron

I submit that the senility defense is not a strong one, but my experience is that age does influence what comes out of our mouths. I disagree with outright dismissal of the discussion, as there is definitely science that ties heredity and intelligence together. Only by free discussion will the quality of that conversation ever reach a point of benefit. Thanks.