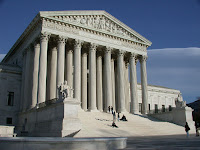 There is little doubt in the minds of most women and minorities that they must make a greater effort to achieve pay equal to White males. This is the case whether one is the singular Lilly Ledbetter at Goodyear, or nearly 80 million African-Americans and Latinos.

While protection from racism initiated the 1964 Civil Rights laws, it was good fortune that had sexism tacked on, in a failed last-minute attempt to thwart the act. Nonetheless, the legal protection for the two is the same. On the surface, the recent Supreme Court ruling against Ms. Ledbetter’s discrimination award seems based on a technicality – a 180-day filing requirement - and the prevailing justice’s predictable interpretations. But there is more to it.

If we accept, for the moment, that minorities and women must work harder for the same pay, relative to White males, might we ascertain a measure of how much harder they must work? What of this effort is due to discrimination? Could reasons exist beyond these traditional culprits of gender and race?

This debate begs the clarifying distinction of whether the minority worker is required to produce more output for the same pay, or does circumstance, which we shall review, cause him or her to expend more effort to produce the same result as a White male.

Historical data, compiled by many sources, including the National Urban League, a long-time leading civil right organization, tells us that for every $1 that a White man in America earns, a black man will earn approximately $0.73. Wage disparities exist for males and females as well, with the rate for men being higher relative to women. Under these terms, the Black man earns 27% less than does his White male counterpart, for possessing the same qualifications and performing the same work. However, if we examine what is required to produce the same output as a White male, yielding true equivalency, the question is really about why the Black man, as folklore describes it, is working ‘harder’ than his White peer. In fact, if he is truly working harder, in effort or hours, to produce the same result, would this not describe him as relatively less efficient and therefore deserving of a lower compensation? Alternately, if he consistently produces the equivalent or greater output of a White man, for a similar effort and time, a disparity in wages means the case for racism would exist.

The logical question for a wage disparity analysis is whether the differences we experience are predominantly skills based, and therefore a market-driven response in pay, or more simply they are related to sex, race, or some other non-objective criteria. Central to the study is the point at which skills development disparities reveal themselves, prior to hire, along with the degree to which the employer can accurately assess any divergence and legally act upon it. Organizations act on what they know, or suspect, by either not hiring an individual or hiring and, more reactively, employing that person at a reduce wage over time to reflect any revealed disparity in output, or efficiency.

Studies of school-age children have shown that divergence of skills occurs early and sustains itself through adolescence and into adulthood, at rates comparable to the wages disparities we see. The best measure of this skills disparity is graduation rates, at nearly 30% lower for blacks in high school, and 43% lower for White females versus White males in college (engineering sciences). It is counter-intuitive to expect wage rate disparities in women or African-Americans to be anything other than consistent with this divergence in performance established in early childhood through working-age. Importantly, this data is not saying why the skills disparity develops, just that it is real, and wage disparities are a market response.

The Supreme Court may have chosen a technicality for explaining their reversal of Ms. Ledbetter’s victory, however, our misunderstanding of the origins and relationship between long-term skills development and wage disparity, which the high court failed to illuminate in their decision, is a side-step of the issue. This maneuver will have supporters of each position preparing for a rematch down the road, rather than moving toward better programs to close the performance and wage gap.

There is little doubt in the minds of most women and minorities that they must make a greater effort to achieve pay equal to White males.

Little doubt...but also little proof in the case of women, at least. Fact is, women now make as much as, if not more, than men for the same jobs.

Problem is that 2nd-wave feminism has been wantonly spewing self-serving lies for the past 50-odd years...

I disagree that the wage disparity is a function of skills and/or education disparity. Census data indicates that African immigrants to the U.S. have educational attainment levels six times that of African-Americans, twice that of European-Americans, and marginally higher than Asian-Americans. That said, a Vanderbilt University study concluded that wages for African immigrants are still lower than that of White Americans and Asian immigrants. Sometimes, you just have to admit that is is DISCRIMINATION. We can pin the disparity on market responses if you like; racial discrimination as always been a powerful market force in the United States.