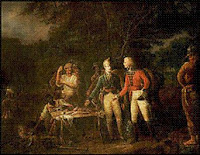 The world of political correctness makes for strange bedfellows of thought.

While it was distressing to many of his lineage, Thomas Jefferson's intimate relationship with Sally Hemmings, which seemed to move beyond a master raping a slave girl, offered mild rehabilitation to his racist founder image. Former South Carolina Senator Strom Thurmond took a similar walk, but in neither case did these revelations change who they were or what they stood for.

It pings odd that a black slave, with no rights as the property of another, should be posthumously elevated to the distinction of patriot. A patriot is someone who gives of themselves, freely and clearly, for a cause they believe in. Could Oscar Marion, slave of General Francis Marion, freely decided to support a regime that kept him in bondage? Jose would probably say no-way.

This is not to declare that Mr. Marion's family should not either be proud of him or want his face, on a painting in the Capitol building, to have a name, for all to see.

But what is really going on here? We are equating being an exemplary slave with being a patriot worthy of presidential honor, and in doing so we ignore that undermining their masters was the highest, and perhaps most noble, form of battle slaves could undertake in their quest for freedom.

We should rightly recognized Blacks and Whites who gave their lives so that Blacks could be free to become true patriots, as the Massachusetts 54th Regiment and others so willingly displayed from the Civil War, up to the present. PC correctness aside, there were no good or bad slaves, just men women and children placed in very difficult circumstances, with little or no choices.