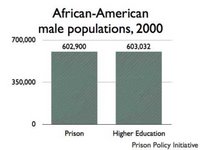 Researchers have proven the efficacy of isolating groups for study. However, isolation as a remedy, unto itself, is laden with traps, the most obvious being the introduction of influence factors that distort and confuse potential findings in uncontrollable ways.

Black Male Initiatives (BMI) inherently postulate at least two errant macro-assumptions about Black males, and that which challenges them. The first is that their issues are more significantly external, and therefore controllable by isolation. The second is that once the target efficacy is achieved, that it can be sustained as the group re-integrates into society.

A second problem with BMI’s is in their unscientific approach. They attempt to re-engineer solutions by experimenting on an isolated, but uncontrolled population, with the goal of somehow ‘fixing’ them. This approach, at best, hopes to stumble across effective applications to the issues the group is facing. Even if improvement occurs, identification and assignment of factors across multiple interrelating variables is nearly impossible.

Lastly, the most significant Black male, as well as female, issue is school performance beginning in elementary school and leading up to high school, with atrocious graduation rates averaging just over 50%. While Black males also suffer low college graduation, so few get to college that we must wonder how studying them provides hope for the 'ground-zero' of early education where nearly half are disqualified.

Spending public monies on questionable programs aimed at gender and race sub-sets raises issues of relevance and equity, as well as legality. Are we doing the same for similarly challenged Hispanics, Native Americans, and Pacific Islanders? No one is saying that Black males do not need attention, but when the problems show so prevalently in the first grade, as education research shows, we need to ask ourselves if college-level BMI’s programs are more distracting than potentially illuminating.