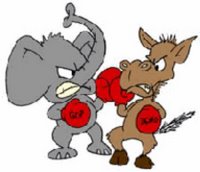 If an outsider were to look in on US politics, with the overwhelming support Blacks provide to the Democrats, they could only conclude that Republicans are all racists and Democrats represent the ‘rainbow’. But even if this were true, and it is not, determining who is real to their respective political party is increasingly difficult, as the lines distinguishing the two are blurred and always on the move.

When Democrats believe the conservative hard-line is winning they pull a switch. When Republicans see the liberal ‘brother’s keeper’ approach appealing to voters, they too switch. So in the end, who are these people? More importantly, why is it that Black people are so confident, by reason of their voting, that the Democrats are always the ‘good guys’?

Conservatives are no greater or lesser racists than liberals and vice versa. Inasmuch as they are people first, they each see the same Black under performance that all of America sees, with no credible explanation, and they default to the same racist conclusions, spoken or not. While they obviously practice their conclusions differently, the result is the same, Black people remain on the margins of influence, with a plight to match.

The idea that the White majority works to stay in disproportionate control, to its own advantage, is not new, or even devious. However, the verbal and behavioral concert that the parties deliver, while seeming to represent opposing philosophies and values, is an increasingly adept slight-of-hand, repeatedly consumed by Blacks. This consumption needs to stop.

By example, Black clergy need to stop inviting White politicians into their church homes one week before elections, knowing that they will not see them again until the next election. Blacks need to treat all politicians, including Blacks, with the same suspicion of who and what they really represent, and what they have done, not promised, to earn anyone's vote.

The entrenched state of Black America calls for none other than the total revocation of all existing ‘free passes’, or votes, into office. A captive vote is a wasted vote.