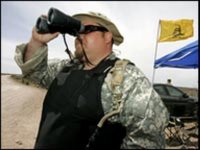 It may dishearten some, but it is not surprising to hear of immigrants who made it to citizenship, on the heels of legal or illegal entry, offering their support for closing the door behind them. This immigrant ‘gaming’ has occurred with every wave of new entry Lady Liberty has beckoned.

Some argue the unfairness of the negative impact and speak to their newfound responsibility to their fellow citizens, as dictating their revised 'full-stomach' position. This gaming for favor and advantage is no different than Blacks who benefited from affirmative action, only to denounce it as valueless.

While there certainly is a cost to having immigrants, there are also tremendous benefits. American business has long required labor that was ready, willing and able to contribute the low cost/skilled effort required. Each wave of newcomers has propelled the country to greater heights. As long as those benefits exceed the cost, the country’s labor capital needs will continue to propel them past fences and pseudo-minutemen.

In exchange, the newcomers received opportunities to ‘grab the brass-ring’ of America. This begins primarily with paying their way, via taxes. As long as newcomers are willing and able to provide their fair share, unbiased logic would argue their positive value add. Since 1996, the IRS has, in fact, issued 9.6 million identification numbers for the purpose of allowing illegal immigrants to pay their taxes, without INS interference.

The issue with affirmative action and its continued status is different, in that sometime in its 42 years of implementation this temporary redress stopped working. While it kept sending Blacks through doors previous locked, it was not helping or motivating the group to perform to their competitive best, but rather creating an unhealthy dependence, and with it, resentment and conflict. Inasmuch, it is circumventing the fundamental reward system upon which the country’s success was built. The plight of Blacks calls for continued attention, without a doubt, but attention that produces affirming results, not dependency.

Unless it can be shown that immigrants cannot or will not pay their way, via the taxes their lawful work generates, or pledge themselves as full citizens, they deserve the same welcoming consideration afforded their predecessors. To do anything less is un-American, and weakens our future. For their part, the recipe of successful membership is allegiance to one flag, one language, one vote, in exchange for one more rich patch to the country's 'quilt'.