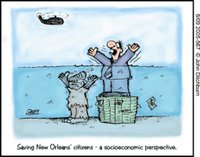 New Orleans In a Tempest Over 'Deluge' - Washington Post

New Orleans Election Is Too Close to Call - AP

While it may serve both candidates in the short-run, vowing to keep race out of the New Orleans mayoral challenge does not serve the interest of the people. Are the candidates offering that they cannot have a constructive dialog about issues of race without baiting, and race-politics? Let us hope this is not true.

Regardless of what the candidates say over the next few days, the ‘elephant’ of race is definitely sitting in the living room. Indeed, once the discussion goes beyond hurricanes and levees, race will hopefully come out of the shadows.

Like most southern dialogs involving race, whether governed by old or new tradition, the partition remains of what is talked about openly, and what is discussed behind closed doors. The open discussion pertains to who will become mayor of the city’s revitalization. The backroom discussion, however named, is about avoiding the ‘Black problem’, the crisis of Black plight in America.

To call it the ‘Black problem’ is neither to blame Blacks, nor relieve Whites of their responsibility, but instead to place the ultimate burden of the challenge where the pain squarely falls, on Black people. This burden has existed since the emancipation of slaves, nearly 143 years ago. It is time that the group said to themselves, we have had enough!

Saying enough means demanding an accounting of the lives of New Orleans Blacks, and their counterparts throughout the South and urban America, who are not nearly doing as well as the country wants to believe. It is time the polite covers came off the discussion.

The restoration of New Orleans harkens back to post civil war reconstruction, where there was maximum attention on the land, buildings, and plight of southern Whites, with much less attention given to the people who were, in part, the subject of the battle.

Today’s flood-ravaged city is an open view port into the ‘The Black Belt’, 623 counties stretching from Texas to Virginia, housing approximately half of the nation’s Blacks. This region has a stranglehold on the country’s highest poverty and unemployment, and lowest education. Add to this poor health care, higher infant mortality, and social dependence, and the word crisis begins to sound inadequate.

Tending to the needs of New Orleans’s economy is a status quo approach, particularly when what they are missing is proper bricks and mortar. Blacks, on the other hand, are missing the opportunity for lives they and their ancestors earned through sweat and suffering. But the critical part of the missing ingredients is honest self-assessment.

When leaders and their hopeful challengers, promise to solve problems, which our experience tells us they do not understand, by avoiding the discussion, we should be alarmed. We are deceiving ourselves again, and our desperation is complicit. This Katrina ‘neutron-relief’ strategy is sure to have buildings re-standing, while Black people continue to fall.

Now let us talk honestly. Yes racism exists, but it does not come close to explaining why 39 million Black Americans, in aggregate, are ensconced to America’s economic bottom. One undeniable factor, however, is the contiguous education and skills gap Blacks bring to the US economy, from an early age.

Curiously, this is the same education and abilities that African immigrants, barely ashore, are able to acquire, with the same skin color, with the additional language and cultural barriers, and with racism. In fact, the Journal of Blacks in Higher Education reports that 28% of foreign-born Black men earn four-year college degrees, nearly on par with native-born White men. So what are these men, predominantly from Africa, thinking and doing, which has them on par with White men, in earning college degrees, so soon after they arrive?

Now less we believe these figures are a fluke, consider that while speaking to Black alumni in 2004, Henry Louis Gates, Jr., Chairman of Harvard’s African-American Studies Department, said up to two-thirds of the school’s 530 Black undergraduates are immigrants or progeny of foreign-born Blacks, mostly African and West Indian.

The success of foreign-born Blacks may or may not hold answers for curing the plight of African-Americans, but it looks like an extremely good place for the country to begin a dialog, and who better to start than the two men who say they want a chance to deliver for the whole of New Orleans, beginning May 21, 2006.