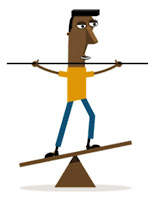 Once I digested the hopeful feeling from reading an article that placed responsibility for Black ills and solutions on Black shoulders, I had an ah-hah moment. There was no talk of affirmative action.

It's not that those speaking of Black responsibility don't support this remedy, but rather it is just difficult to integrate the message of looking inside for the greater truth, while attempting to hold-feet-to-the-fire with guilt strategies and tactics. The two just don't go well hand-in-hand.

The idea of affirmative action was not a bad one, but it should never have been paired with equal opportunity. At the time, Whites and Blacks felt the need to thrust open a door that had, for so long, been held closed to Blacks. But a fit of guilt was not a long-term solution for a people who have been chasing advancement for thousands of years.

Awarding points for the color of their skin does not make Blacks better doctors, lawyers or business people. It does not instill internal or external confidence or trust, but rather raises suspicions and casts dispersions, even in those cases where performance meets or exceeds the norm.

America needs to focus attention on solutions that graduate and employ Blacks into the American dream. This promotion cannot guarantee success or circumvent failure. In concert, lawlessness and anti-assimilation needs to lose its commercial and social appeal. Blacks must be at the helm of this journey and belaboring yesterday's sins does not solve today's problems. Then was then, now is now.