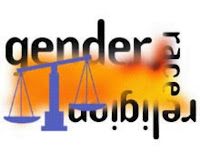 Whenever I see tests designed to search out racism I come away disappointed. This has to do more with the agenda of the test makers, making people feel bad about their biases, rather than helping understand them.

Once guilt inevitably begins to subside, the shame-game must either be invigorated or abandoned. To invigorate, there must be new reasons to make people feel bad. Old injuries must get new names and enhanced definition.

However, in a world of normally distributed disparity, is it reasonable that ideals of equal results should dominate? Whose ideals are right anyway? If Black males commit a disproportion of the violent crime, is not bias against them, with respect to violence, reasonable - even preferable? The better question might be if the bias is in the same proportion as the violence that is driving it?

The IAT, or Implicit Association Test, presented by Harvard's Project Implicit, give test takers a chance to see their biases in narrowed context of comparison, and with limited judgment. This gives these tests a glimmer of hope to be useful to the users.

Human disparities are a given in a world of disparate resources. Biases are a natural result. Stereotypes can be accurate and useful, with empirical backing. When we clearly see our biases, only then can we ask ourselves if they are fair, and advancing. Equally, when we see the biases of others against us, we should include the question of if we are the cause or the result.