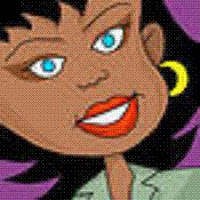 I have looked around the net quickly today in search of some reasonalby concise explanation of what it means for a black woman to be accused of "acting white".

My Lady is a General Manager at a Fast Food Resturaunt, she does not wear a uniform because she does not have to, she dresses nicely but not Formally, she wears make up, is beautiful (customers male and female follow her from store to store when they transfer her, she gets dozens of winks a day and a handful of date invitations from mostly white men), she smiles, is respectful of people, and generous.

But the people who throw this accusation/complaint at her take this attitude with her the moment they walk in the door.

It is mostly youg black males and females.

We have talked about this and neither of us really understand these people's complaint.

Is it the colored contacts?

Sir: As they say, the devil is in the details.

Indeed, it is the wearing of colored contact lenses that is encouraging the explicit accusation of acting white. Your partner's mannerisms may make some Blacks less comfortable, but they rarely elicit the response you describe, in that context.

Assimilation of advancing behaviors, which some Blacks errantly assign to Whites, does not include changing one's eye color. It is one of those attributes which correlates to fairness of skin, and serves no objective purposes other than to enhance one's visual appeal, in this case, directly on an exclusive European scale of attractiveness.

While eye color mutations occur randomly in all populations around the globe, they survived in northern hemispheres because they did not raise mortality rates in the process, and they enhance sexual attractiveness relative to whites with brown eyes.

Just as Michael Jackson can be rightfully assessed as acting white, by permanently stripping his skin of melanin, a black person who lightens their eyes with contacts is temporarily altering themselves to have a trait that only comes with a significant amount of European ancestry.

If your partner wants the accusations to cease, she needs to lose the colored contacts, or learn to expect and ignore those who are offended by her choice. But let's be clear, what Blacks are most offended by is her rejection of natural black qualification in attractiveness, which they associate with such an explicit and discretionary substitution.

[QUOTE][i]But let's be clear, what Blacks are most offended by is her rejection of natural black qualification in attractiveness, which they associate with such an explicit and discretionary substitution.[/i][QUOTE]

I beg to differ, James. One needs only to turn on a television, open a magazine, or indeed set foot outside their door to see that Blacks do not have an aversion to artificial enhancements which "reject natural Blackness". When was the last time you saw a Black woman with a natural hairstyle (besides braids)? Does the woman who choses to wear an afro get praise for her choice, or harassing messages to "get that nappy fair fixed"? Tell me, how many "video girls" have strong African features? Are very dark people no longer teased for their complexion? More often than not, the image of female Blackness we as a community are bombarded with are usually biracial or light-skinned individuals. At worst, the more Black looking images are santizied with relaxed hair and other enhancements which implicitly reject natural Black beauty. Ask a Black man what his dream girl would look like--or a Black woman what she desires to look like-- a surprising percentage will respond along the lines of "thin, light skinned, long straight hair".

More than likely, what angers the young Black customers is not the woman's colored contacts, but her bubbly demeanor which is at odd with "keeping it real". Perhaps she "sounds white", which also tends to ruffle feathers.