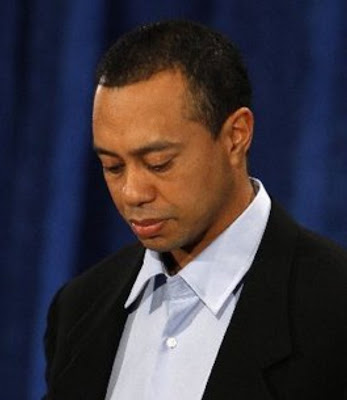 My first reaction to the Tiger Woods public apology was that he needs to shut up and play golf. It’s is clear that neither he, nor those counseling him, are as smart as the demons chasing him. This is evident in the double root-canal press conference the other day. The Buddhism reference was most painful, in that it conjured up the classic celebrity-as-god conundrum, personified in the late Michael Jackson as a Jehovah’s Witness child-molester. God and religion are the Pandora’s Box of celebrities. Avoid, avoid, avoid.

Stepping back, Tiger’s life is in a tough spot, and I feel for him. His near deity status in golf is what encouraged/facilitated his excessive pursuit of outside women, especially what earthly rules applied to him. He lightly touched upon this in his apology, but he does not yet get it. He can’t get it because, now more than ever, the golfing world is begging for the return of their god, while he struggles mortal.

The industry (of golf), which he heads literally and figuratively, is hurting like it has never hurt before. Golfers, courses, tournaments, sponsors, retailers, and manufacturers alike, are missing billions of dollars. They need this guy back on the links in the worst way. But, they want him to be a man and their god at the same time, and this demand is quite impossible for him to sustain. Until he figures out who he is and what he really wants, he is Tiger, the damned.

I think you've hit the nail on the head! Poor kid, he's done nothing that any other man wouldn't/hasn't done, and he's paying such a high emotional price....

I think it was a big mistake to do this. If it wasn't possible to just ignore questions about it he should have stuck with the "It's Nunya" defense. When the inevitable "but my son looks up to you" starts he should say "tell him to study my swing and not what I do with my ding-a-ling". It seems simple to me, I must be missing alot of what's involved.

First I don't care what Tiger does with his life,it's none of my busines who he beds down with.
Second Tiger has enough money to do what the hell he wants with the rest of his life.
Third and final comment,my life will not change if Tiger returns to play golf or not!

Bigmac, exactly. I've seen about 60 minutes of "pro golf" in the last 3 years. A fun game if you've got the time, but WATCHING someone else play it? That, and NASCAR (whatever).

Tiger's mistake was marrying a woman like Elin Nordegren (not that any of the 95% of Western women who are infused with a sense of female entitlement would have been any better).

@ Jay: Why was the fault in who he married and not the betrayal of his vows to that woman?

I think the only apologies he owes are to himself, his wife, and to whatever agencies whose contracts held morals clauses.

The black community has a great role model but have all but ignored him.

Quit betting on losers and go with a proven winner. A better American/human being never lived.

But alas the human condition continues down the path of proven failure and destruction.

Tiger Woods is not a factor in our community. His father is half-black/half-white, and his mother is asian...He's not a blackman, so, why do black people care so much about him anyway?

Anon 12:15pm, Part of everyone's interest is the US legacy of the one-drop rule. As half-black, Earl Woods, grew up as a black man regardless of his acceptance or denial of his black heritage.