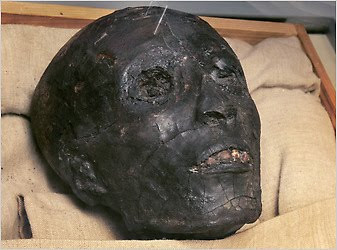 The NYTimes just reported on a study and discovery that Egyptian King Tut (Tutankhamen) most likely died from malaria (p. falciparum)(here). I know, I know, you are saying, so what. However, beyond the amazing fact that researchers were able to pinpoint a cause of a death so long ago (1324 BC), the idea that the most well-known African King died from malaria, perhaps the oldest human disease of record, is clear invite into the reach of the disease, and impact on the evolution of Africa and humanity, and across the ocean.

We know from statistics and the work of organizations like the Gates Foundation, that malaria kills one million Africans, mostly children, per year. Until most recently, the disease has taken the second chair behind HIV, estimated to have killed 22 million Africans. While taking nothing away from HIV, malaria’s death total is reasonably up wards of 5 billion (100,000 avg. deaths/year x 50,000 years: assuming 100 billion total births). So what happens to a continent and a people who evolve under such harsh conditions, not to mention tropical challenges – heat, drought, famine, wild animals, poor agriculture, etc.?

The great African brain drain of the best and brightest. Everyone who could leave did leave – not to return. Still do. Societies develop at a relatively slower pace (hundredths/year), because a disproportionate share of resources is sucked away by a disease that has no craftier equal. The slower pace of development increases vulnerability to hostile and advanced outsiders. Viola! Colonization, slavery, exploitation, etc. It is amazing (at least to me) that something so simple as what killed King Tut so long ago, can so readily begin to explain so much today.

Africans kept malaria somewhat at bay for a long time because they did not live in large urban centers with dense populations-like Europeans. Those kinds of societies facilitate the spread of malaria.

Also, as you mentioned, tropical and subtropical areas are foci for various diseases. The disease gradient lessens as you move away from the equator. It's no surprises the many of the worst diseases have come from Africa; Malaria, HIV, Bubonic Plague, Schistosomiasis, Ebola, etc.

Interesting that carriers of only one allele of the sickle cell gene are more resistant to malaria. I find it fascinating how traits evolve in nature to compensate for biological stresses. And yet ... when both recessive genes are inherited from parents, can cause a crippling fatal disease. Our bodies, our physiology, is a history of survival, a constant battle of us against the effects of this planet, our environment, upon us, including our different racial appearances and traits.