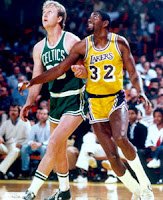 I admit that I am a throwback to the “BT” days of basketball, where “BT” stands for before tattoos. Trash-talkin’ has always been part of the game, but I liked it when it had limits and was not for audience entertainment, but rather for ‘psyching-out’ your opponent. In those days players did not have to worry about getting a drive-by, courtesy of someone’s posse, after the game.

Anyway, what struck me about this whole fouls and race ruckus, is how, among the range of NBA professionals quoted, only team owner Mark Cuban understood that the distinctions shown in the data are reasonably invisible to the naked eye, but nonetheless important in a game of ‘inches’. This is the whole reason for statistical analysis, to get beyond assumed truth to that which can be verified.

The NBA as an organization is biased to the outcome and looks silly challenging the independent findings, without a willingness to prove the robustness of their in-house data and analysis, via an independent peer review.

These responses remind me how during Brown v. Board of Education, eventual justice Thurgood Marshall successfully argued that Plessey’s separate-but-equal doctrine might ‘look and sound’ fair, but looks are often deceiving. That actual data showed something very different about the plight of black education in Topeka, KS. Thank goodness the late justice and team were able to see and argue past the end of their noses, on that one.

I am not surprised by this finding, however, a statistic that I would like to find out is, if the prejudice and the bias is the same with black referees to white players as it is white referees to black players. Obviously this would have to be a ratio stat but it would still be interesting to note. Sometime I think we take one step forward then two steps back when it comes to fighting racism. Why can't we understand that we are all brothers and sisters?