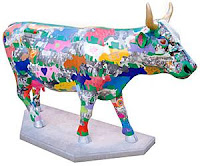 The story of the sacred cows.

In the beginning, the first cows into the barn let all other manner of cows, weak and strong, join, even though resources are scarce and the farm is in difficulty. It is this burden, in part, with weak cows, that is holding back the progress of the farm. The lead cows justify their actions by saying, ‘we are just doing what the previous cows did’. But the previous cows paid the price for their misdeeds – they are now wandering the fields, hungry - and this too is the looming fate of the current cows.

Now along comes a special cow with proven leadership, who says he knows of ways to progress. With difficulty, he releases the marginal cows into the field and focuses on the opportunities of the cows that remain. The farm begins to improve and everyone is glad, except the first cows and their remaining cohort. They feel vulnerable because their status is no longer protected by friendship and seniority, but rather is based on their contribution to the farm.

The disgruntled cows look for opportunities to thwart their new leader, and return to the past. They say he smells and acts different than them, and that other cows should not be fooled by the apparent progress of the farm, by his hand. They confront him with issues unrelated to the objectives of the farm, as proof that he is unworthy.

In the end, the first few cows re-establish their domain so that they are to be happy once again, while the farm threatens to slip back into poor health. Cows who believed in the new leader will retreat and leave for better opportunities, while the farm and its sacred cows will ultimately cease to exist.

sacred cows are everywhere! too bad that ultimately, the Black students in Little Rock will be losers when this drama is done. we have similar issues here in Georgia when a Black majority finally gets the opportunity to "flex" against the injustice of "perceived racism," we never seem to win!

there is too much emphasis on "righting wrongs" rather than "acting responsible" - that's a formula for failure.

i live in a majority Black school district and i send my daughter to a private school!