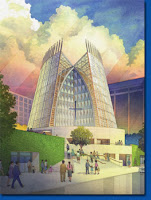 With all due respect to his holiness, the Pope is blowing smoke at the people of Brazil, and the rest of the world, for that matter. The missionaries that brutalized, raped and pillaged all corners of the world in the name of Catholicism, did so with the full knowledge and support of laws tailored by and for their religious expansion.

If the pontiff is really sorry for the sins of his predecessors, I would personally ask why his Church is spending $200 million in Oakland CA, to build a downtown cathedral, with architectural splendor glorifying God, while failing the community the Church is claiming to serve? A community, by the way, whose poor are in crises, not including sexual abuse by Catholic priests under cover of Church leadership.

Less there be any doubt in our minds, a quick trip to Rome educates us to the export business of the Church and the historical and economic benefits received. The city, including the Vatican, is awash in wealth derived from forcing vulnerable communities into their brand of Christianity, including remunerations to the mother Church for the privilege.

There is no doubt that the church should be embarrassed by their past, considering that it claimed to be the moral ‘compass’ at that time, as it does now. The truth, of course, is that the church’s moral authority has been no better or worse than any other organization or sovereignty, in search of selfish fulfillment. In fact, the number of people killed in the name of God has always ranked well ahead of all other second place atrocities of man.

Apologize all you want, but what about the people?

"Sorry is as sorry does", I always say. Needless to say, I am not impressed with apologies from the Catholic church.

Frankly, a look back at historical statements from Catholic clergy will show that the Church is NOT sorry, nor does the Church believe it is ever wrong.

The Catholic Church claims to be the only authority from God here on earth and in fact, one of the Popes official titles means "in the place of God".

Catholic apology is unique to the 20th and 21st centuries, a simple political tactic but not genuine with regard to action.

Having been met with heightened suspicion in these centuries, the Church's officialdom seems to be surficially adopting pious meekness, from which one gets the sense that beneath that thin veneer of civility, the Church is merely retreating to gather strength for more middle-ages style "sharing" of the faith in the coming years.