The Riot Within By Rodney King, With Lawrence Spagnola 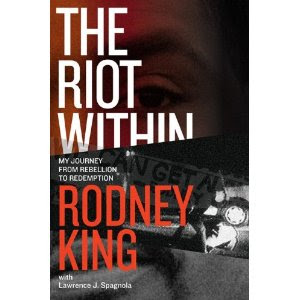 I place Rodney King in a similar iconic category with actor/politician Ronald Reagan, with no intent to offend either. Their individual significance is not about who they are/were, but rather what they reflect about their fellow Americans, from their respective moments in the sun until now.

The emblazoned images of King being beaten with no mercy by the LAPD, and the acquittal of his captors by an all-white jury, galvanized how blacks felt and still largely feel about law enforcement and justice in America.

Even today, the Trayvon Martin killing and George Zimmerman trial have people wondering what will happen once a jury speaks. Will blacks riot? Will vigilantes re-double?

As for the book itself, beyond its macro-relevance, I enjoyed the easy and honest read of how King, the man, came into infamy. I stopped to think of how the fifty-one person death toll of the riots hit him harder than the bone-breaking baton strikes of Officer Stacy Koon, and others that night. I realized how logical it was that the events of those days would only accelerate the litany of abuse he would continue to heap upon himself, as an alcoholic. It was also interesting to know just how little compensation he actually received ($1.8M of a $5.4 settlement and fees), and how his lawyers, black and white, beat the hell out of him financially, on top of it all.

The up-shot is that whether you loved or hated Rodney Glen King, he is forever a part of history that represents quite the tragic tale of race and the pursuit of justice in America.

You make a good point about certain popular figures reflecting more about society as a whole than about themselves individually.

Thanks for taking the time to read and review this for the tour.

(And a quick side note about another of your posts: As a Caps hockey fan I'm disgusted by the racist comments directed at Joel Ward. It reflects badly on the entire hockey fan community.)