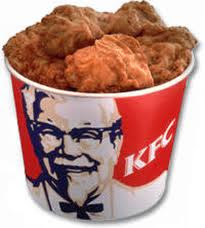 James, let's not overthink this thing...Fried Chicken is good...as with all things, moderation is the key.

Yes, I agree with ronnie :) I think everybody loves fried chicken! Fried food is just...yummy! :))))

Who doesn't like fried chicken? Why I was contemplating these stereotypes a while ago--specifically watermelon and fried chicken. I always wonder why it's derisive to eat them.

"as though fried-chicken has some magical hold on black people. It does not. It is easily and economically prepared, and it taste good."
.
In other words... it has a magical hold.

"I always wonder why it's derisive to eat them."
.
Possibly from heavy indulgence that causes people think those are the only 2 ingredients of a person's diet?

As a southern white woman, I have never understood the whole black people = fried chicken and watermelon joke. Most southern people I know eat them, white and black.

I do know that many of the white people I know have cut way back on fried foods in favor of healthier options. I expect that our black neighbors will follow suit soon.

My own little thought on why they haven't yet is that, for many Southern blacks, their parents and grandparents were quite poor. That often meant eating cuts of meat that wealthier people just wouldn't eat.

At my father's store a few decades ago, we sold pig ears, feet, stomachs, intestines, ect. They were often purchased by black people who couldn't afford the pricier cuts of meat.

So fried chicken was reserved for many poor blacks (and some whites) as a special "Sunday after church" meal. I wonder if the joy and anticipation of the specialness of that meal has been passed down to subsequent generations? So now that many people can afford to eat it on other days, that it is seen as a preferred meal? If so, I expect that gradually the specialness will wear off for younger generations.

What do you think? Does anyone agree, or does this sound way off to some?

I Like Fried Chicken (on occasion) because IT TASTES GOOD.

Sure, fried chicken tastes good. But lots of things taste good. And there's nothing that tastes so good that you just have to eat a bucket of it in a sitting.

"And there's nothing that tastes so good that you just have to eat a bucket of it in a sitting."
.
It's obvious you do not appreciate the religious aspects of fried chicken.
.
Eating less than 2 pieces makes you an atheist.

Mom was one of 14 kids in Louisiana during the 30s and 40s. She told me they sat down to dinner with one chicken and the only thing that didn't get eaten was the beak. She makes the best fried chicken known to man but stopped preparing it when Dad's heart went south. I'm going to Thanksgiving, on the other hand, and the chicken gumbo will disappear long before the turkey.

Im a Southern White male. I have always pondered this very thing. Fried Chicken, Watermelon, cornbread. grits and eggs, cracklin's etc... These were staples growing up. I didn't understand for a long time what Soul food was. Its just Southern food. Its not a racial thing. I wonder if it got to be that way when blacks migrated north. They took their cook books with them ( Your welcome) and it became a racial stereotype....