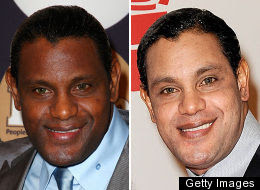 Skin whitening has yet to gain popularity in America, save for the late Michael Jackson and now Sammy Sosa. The former Chicago-slugger, better known for homers and steroids, was pictured a while back in Las Vegas at the Latin America Grammies sporting ‘white face’. Sammy’s move, and full confession, is a good opening to a quick drive-thru on color-ism.

We know that evolutionary skin pigmentation levels, in humans, are a factor of sun intensity, as dictated by latitude. However, within female populations of a given region, relative lightness is also a function of estrogen levels and indicates, to innate male sensitivities, child-bearing potential. It turns out that young females just past puberty are at their lifetime lightest in color, and will become darker with the first, and each successive, child they produce.

So it is not only Euro-ness that some darker people dangerously chase with chemicals and pharmaceuticals, mostly outside of the US in Africa and S. America. It is also youthfulness, as presented by estrogen levels. Of course, I have no idea what crazy Sammy, the dude, is thinking. Somebody needs to tell him that testosterone, the stuff he was illegally taking to slam home runs and get babes, expresses itself in darker skin tones. This is the reason behind the universal womanly swoon of ‘tall, dark, and handsome’. Maybe Sammy is just expressing his youthful feminine side, or (better yet) trying to undo many years of ‘skin-darkening’ steroid abuse. Who knows?

In any event, I put these products, along with colored-eye implants, in that very dangerous, desperate, and MJ-crazy category of I-hate-myself nip/tuck stunts. I am happy that aggressive skin-lightening has never really caught on in the US - despite Beyonce’s’ Revlon commercials.

I know I'm not adding anything new to this topic, but the esthetic myopia that rules this country needs to end; racism gets sublimated into many strata and substrata of society and culture and as a result the soul of our country is deformed. As a white man living in the United States, I hate that many African Americans feel a need to lighten in order to be seen as being of more value than if they didn't. I understand the reasoning behind it, I mean this country's history has shown an exclusive premium placed on "whiteness", but in order to fix the problem it's not necessary that blacks lighten, but for many of us whites and blacks alike to "darken" our sense of appreciation to see that value and beauty are not the exlusive domain of "whiteness". Black is beautiful, white is beautiful, brown is beautiful; the fact is that each and every "type" is a beautiful and valuable and amazing expressesion of esthetic wonder.

"In any event, I put these products, along with colored-eye implants, in that very dangerous, desperate, and MJ-crazy category of I-hate-myself nip/tuck stunts."

now, are the colored-eye implants only dangerous and desperate when MEN do it? because you suggested recently, for black women, in the discussion about hair color/eye color variation:

"And temporary colored contacts are way better than silicone implants, that are nothing more than auto-immune time bombs."

@Boca, colored contacts lenses are cosmetic, cheap, and safe, regardless of who uses them. Colored eye implants are very dangerous and expensive, and should be avoided by everyone.

Does anyone remember the Porcelana fade cream ads from the 70's and 80's in Ebony magazine? Julius Erving's ex wife Turquoise was the spokesmodel and she was a pretty fair skinned sista. You can still get the stuff in Korean owned beauty supply stores, I don't know who is buying it these days...

What i've read on the topic shows that within any given ethnic or racial group, the natural preferences go this way : women want darker men and men want lighter women. It seems to me quite evident in north-america. Most of the famous (light skinned) black women are with much darker men and vice versa for famous black men (most of them dark).

I've always wondered where were the light skined black men. They're pretty invisible in the media and i think the light skinned black man is a 2nd grade product in the eyes of black women.

Among asian indians we see the same thing. They don't actually like dark skin BUT the men have to be relatively darker than their women. The dark man/light woman theme is seen in the art of pretty much all the mediterranean people, from the egyptians to the greeks and others (Sorry i dont think egyptians were black or something like that). Among the chinese it's the same thing : Light skin is highly favored for women.

So in the end i will make a rare concession : I will use racism as an explanation :)

It also means that those skin color preferences may be hardwired but they're changeable. Among modern europeans/whites, dark skinned , tanned women are considered beautiful. Those tanned women would have been considered *hideous* by their ancestors of even 150 years ago.

Hello, very interesting blog. I just found it. and I wanted to say just my word. not trying to give but just my personal opinion.

we has a human race growing, in many different ways, faith, science, thecnology, etc... it's part of our nature be curious and make changes if we wish.

the principle I believe is respect. who cares if you have a brother who's blue or black or red? nobody, because we like to see the outside but we know is more important the inside and honey's the inside doesn't have any freaking color. but while we are in this "material" world is just our nature as humans trying to play to be whatever we want to be.

I feel that instead of making fun of people that choose to lighten their skin or wear contacts for whatever their personal reason, try being little more understanding and have some compassion, you're not perfect yourself. Or you can just simply mind your own business. It's really not that big a deal. People wanting to lighten their skin should not even be an issue and it's surely not a problem to me I care to whine about. The issue here should be that people don't know how to mind their own business.

ogunsiron - you are absolutely correct. I am black and dominican. It is so true, Dominican women prefer "lighter skin men with good hair and nice eyes." But so do the men in Dominican Republic. They prefer women that are their color or lighter. And like you said, it is also the same in Asian cultures. My friend is asian/black and she was darker then her cousins. Her aunts and uncles went with either asian/white men. Her mother was the only one who went with a black guy and they were treated as outcast in the family. Also, black people are not the only people who lighten their skin. In fact, many black people get their products from Asian markets. White people bleach their skin as well. They believe the whiter the younger you look. Madonna is well known for bleaching her skin as well as Nicole Kidman.