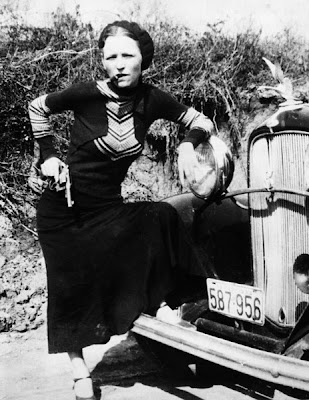 I wondered why I had not heard from the D.A. regarding a court date for Little Miss Suzie Q, who, if you recall, put a bullet through the wall into my quarters (living, not hind) a few weeks ago (here). Well, there’s a good reason for the silence – Suzie did a 'Bonnie' (pictured) and is ‘on the lam’, as crime professionals are want to say, meaning she skipped-out on whatever bail terms were set and is nowhere to be found.

More accurately, from my neighbor who owned the gun, the 20 year-old Suzie gave the Oakland Police a fictitious name from the get-go, and managed to get cut-loose from the pokey before the authorities realized her face, name, and fingerprints did not match. It seems that she has a previous warrant for her arrest on an unrelated charge, and she wanted to avoid confusing past illegalities with fresh and new stuff. I can’t help but wonder if the OPD let their guard down a little on Suzie, because they just don’t get too many Brady-Bunch outlaws.

In any event, Suzie has now made a bad situation worse, by lying and jumping bail. Until she is caught, she will live everyday as though it is the day before she goes to jail for a good while. Remember, negligent discharge of a firearm carries a minimum jail term of not less than six months and not more than one year. So if you tack on some time for her prior offense (whatever that is), and a little more for being a naughty girl, she’s now looking at a year-plus time in the slammer.

Unfortunately this type of behavior is excused and even encouraged in modern young women. I mean it's better than being enslaved by marriage and children, right?

Did she have a pretty smile?
I drove a taxi for a while in Lexington, KY. One of my regular customers was a stripper. She was blonde and beautiful and had a charming Russian accent. One of her Russian girlfriends (also beautiful)left her house after several drinks and was pulled over by Lexington's finest. She unbuttoned her blouse and flirted and played up the pouty Russian accent and the cops let her go.

So maybe Oakland's finest were a little distracted.