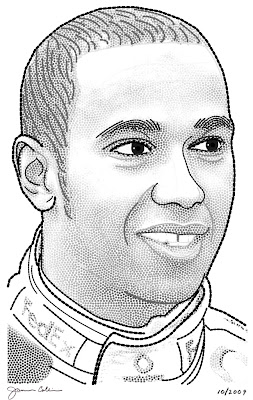 Today the 23 year old Briton became the youngest person to win the racing world's most coveted prize, the Formula One Championship. He entered today's Sao Paulo, Brazil race leading the field and needing to finish fifth or better to clench the championship. He was in sixth place on the last lap of the 70 lap race, but, with a thrill, passed the fifth place driver (Glock) on the last turn, to put himself into the history books.

Hamilton, who drives for the McLaren-Mercedes team under a $75M(US) 10 year contract, has been in and out of the headlines this season, as his presence has incited some, particularly the Spanish, to racist displays. See my earlier post on this. The F1 governing body stepped in to warn Spanish racing officials that they would lose their opportunity to host F1 events if their fans continued their harassing antics, such as dressing in blackface, making monkey chants, and racist name-calling. The Spaniards do not care for the young Hamilton up-staging seasoned Spanish drivers, and have focused their angst on his part African heritage to make their point.

The most recent flap was a Spanish web site that invited visitors to place a sharp object on a picture of the Sao Paulo track to 'puncture Hamilton's tyres'. While the site was in bad taste, it also allowed visitors to leave comments as well, and this is where it got ugly. 'Half-breed, kill yourself in your car", went one of the more tame of thousands of comments. The classy Hamilton took it all in stride, including the boos from the Brazilian crowd at the end of today's race.

For those who are unfamiliar, the typical F1 race has 55 million world-wide viewers, the most of any sport. It is the planet's most expensive sport, with races held all over the world, except N.America and Africa, and team budgets as high as $400M. The cars reach speeds of 225 MPH, pull 5G's (gravitational force) in the corners, and can accelerate from 0-100 MPH in 2.5 seconds.

Congratulations to Lewis Hamilton, the kid can drive, and thankfully the 19,000 rpm engines drown-out a lot of stupidity in the process.

P.S. Read this for the inside scoop on how Team McLaren guided Hamilton to snatch a last minute victory from the jaws of defeat.

P.P.S. Check out the last lap before YouTube pulls it down.

That is truly amazing. When you break down the cost, and the scope of the racing event.

It is an amazing feet for someone of his age.

Mulattoes are takin' over!

Okay already gloating David, but I will grant that lower barriers to assimilation and greater trust across ethnicities should catch our attention.

I have been following Lewis since he started last season. Being foreign meant I watched F1 before anything else. Man... Last season was a heartbreak. He lost it in the last race of the season. What a party we had this year though. You know what else is amazing? He is just one of the nicest guys as well. He proved another thing - just give people an opportunity. He had the talent, but it took the big boss of Mclaren to take him on at a young age and invest in him. Lewis - he the man!