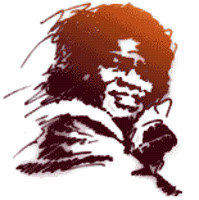 Elvis was great, but did not do it. Weird Michael Jackson tried to buy it. The Rolling Stones shot blanks from the start. Eric Clapton was too shy. So what is it? - capturing a moment of need of a people.

The Beatles did it. Elton John, perhaps when Lady Diana died. Bono has certainly given it a good shot with AIDS. And then there was James Brown. Before Black people could officially start the struggle that will be unflinchingly theirs for many years to come, they had to find a toe-hold in themselves.

The name began as nigger, then colored, then Negro, then Black, and now sometimes African-American. But it will always be the Godfather of Soul's challenging proclamation, "(Say It Loud) I'm Black And I'm Proud", that put Black Americans, and the world on notice that how they view the group needed to change, even to this day. The Black Panthers may have lit the match, but it was Brown who tossed the log.

Back then it was a struggle to be proud of something as simple as the color of one's skin. Today, the song stands also as a monument of how all rhetoric has its limitations. The failure of Blacks to drive the superficial views of skin color to the recesses of their hearts, minds, and hands is crisply captured in Brown's roller-coaster life. Ah, but what a star he was.

Prince is the only artist that seems to really have what it takes to steal the thunder, or at least carry the water of James Brown. Let us hope he continues this legacy. As it remains for Blacks, the group cannot be proud while too many pursue academic ignorance, and spiritual bankruptcy. Regardless of how many songs Blacks sing or rap, sports awards they capture, or Oscar's they mantle, it is diplomas and PhD's earned that accurately measure the pace and direction of advancement of the group. Nothing accelerates a group faster than the leading edge of learning. But the value needs to be deep-rooted, and unfortunately it looks nothing like bling.