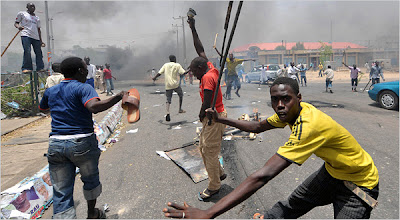 After recently attending the award-winning Nigerian musical FELA!, about a musician’s travails in that challenged African nation, I was out in Berkeley with friends enjoying a great Nigerian band (BaBa Ken/Katoja). The venue included many ex-patriot African patrons. While enjoying the music, my party ran smack dab into the issue of recklessly importing people who grow up in a very different and, in the case of Nigeria, dangerous place. Shit happens, and it did.

At one point in the evening, my girlfriend whipped out her recently acquired iPhone 4s, to take a picture of me. Immediately afterwards, we were faced with a very angry Nigerian fellow who thought she was taking pictures of him to somehow facilitate his untimely demise. Perhaps he left Lagos under a cloud - I do not know. The country is certainly a very dangerous place where a small amount of tribal difference, hostility, or money, can get someone killed.

Anyway, despite our attempts, the Nigerian fellow could not comprehend that his identity did not reside on the phone, and that we did not work for the government. At one point he grabbed the phone, to get a closer look, and then refused to return it. In all his yelling, he asked me if I wanted to fight. I said no, but also that he was not leaving with that phone. His final word was that he was keeping the phone and dared that I should call the police. It was as though he thought the police would either support his obstinacy, or (more likely) that calling the authorities was silly.

I approached the club owner, explained the events and asked him to call Berkeley PD. Before making the call, the owner wanted to talk to the guy and ‘straighten out this misunderstanding’. That conversation ended with the owner fending off the beginnings of a battery by the Nigerian. I then became adamant about calling the police, even if I had to make the call myself.

The Berkeley PD quickly arrived and patiently threatened the man into returning the phone. On their way to this result, they explained all the rights and responsibilities that governed his free attendance at the night club, including possible photos, and admonished that those ideas he brought from Nigeria carried no weight in the U.S. Although he eventually relented, he clearly was not convinced by anyone that Berkeley was not Lagos, Nigeria and that his understanding was inadequate, nor was his behavior in need of adapting.

I went home that night with a profound feeling that this man should not be here, and there are probably many others like him. It is too damn easy to get into this country! Thank goodness he did not have a weapon. While his influential experiences may be little fault of his own, there is no reasonable excuse for his theft or refusal to accept and follow the laws of his adopted land. And whether his ancestors were brought here in chains or he came willingly, the requirement is the same – know the law, follow the law, or suffer the consequences.

At one point early in the dispute, the Nigerian’s female companion attempted to guide him, but his words and body-language, and her immediate retreat, quickly established that he would not hesitate to ‘knock the you-know-what out of her’. His words to her “you, shut up!” were sautéed in a violent tone and look, and the instant fear in her eyes told a deeper and chilling story, by itself.

Here in the capital of PR they will knife and kill a person that is talking on one of those IPhones and snatch it away.

I tell you this because it's in the papers everyday. The cops tell everyone "don't have your expensive phone out because it might get you killed!"

Could it be that he was trying to call your bluff, psych you and get away with the phone? Street smarts, you know survival of the fittest and all that!

But yeah, it's rough out there in other countries! Very rough. One can't expect that a person that has seen and possibly been involved in wars,dictatorships,brutality et al, have the same frame of mind that we do. Never happen as you saw.

Be safe and keep that phone under wraps ;)

Sounds like you had a very educational (and exciting)evening.

Glad it worked out, especially without a fight.

Your post is hilarious. You go to a venue that attracted many ex-pat Africans, and run into one that is an outlier interms of outrageous behavior and then you go on to deconstruct his point of origin instead of just concluding this guy is just trash (trash that every community has). His behavior has nothing to do with Nigeria, or Africa in general. Should I blame the high African American homicide/violent crime rate on Africa too (violent continent..violent genes..results in same behavior in different environments)?? This is not a good argument because it can go in a direction you may not want go.

He's garbage and wont' be able to make it in the bay area anyway. Is he a professional or successful entrepreneur (doubt it), so he'll be priced out of that market soon enough. Hopefully he'll go to a lower cost state like AZ or TX, where alot of ppl (can get) have concealed carry permits and do what you could not do. (not calling you a coward, but CA is not AZ or TX in regards to the ability for a law abiding citizen to get a concealed carry permit)

You know if you didn't like him you should have gotten into a fight with him and that would just result in his deportation, get into the fight just as the police arrive incase you are scared of incurring permanent impairment of some kind (the police would break up the fight in a few seconds, so you would incur little to no injury).