The Avocado: White Oakland Police Officer Does Not Shoot Black Man In BMW 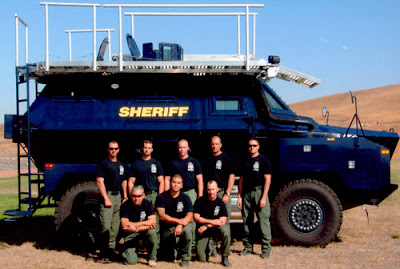 Last Friday, the day before the world was suppose to end, a white Alameda County Sheriff’s deputy, performed a routine traffic stop in downtown Oakland, near the 19th Street BART Station, with an amazing result. No one black was shot, arrested, beat up (or down), and all parties involved, including the officer, left the scene intact. Nearby witnesses were truly amazed with the event, although a few immediately scattered at the first sight of the deputy approaching a man driving a BMW, wearing dark glasses, baseball cap, earphones, and a chillin’ attitude.

As the officer cautiously knocked on the driver-side window, the black man instantly remembered Chris Rock’s rules for engaging the police (here). Instead of rolling down the window and yelling in a Samuel Jackson voice, ‘WTF do you want MF!’ I calmly said with a smile, ‘hey officer!’ He then moved his hand away from his gun (to my pleasure), and asked if I knew that I was parked in a red zone. I said no, but it was possible because I did not recall seeing any marking as I approached a few minutes earlier. I added that I was waiting to pick up someone from BART and this was a convenient spot.

Now this is where it got interesting. Upon my words, the deputy stepped back with a look of disbelief and shaking his head. He then straightened up and, with authority, asked for my license and registration and if I had anything else to offer, wherein I said, ‘nope, you got me dude!’ I fully expected a citation, but then he busted out laughing, (like when you were a kid trying to keep milk from shooting out of your nose when your brother farted at Grandma’s dinner table). Officer Laughtrack said he could not believe I was offering the truth as my defense, in downtown Oakland, site of riots and sh_t. He said let’s just call this a warning. I was a little offended that he had expected me to make something up, but I figured it was not the right time to get all righteous, seeing how he did not 'accidently' shoot me.

As he drove away grinning, he beeped and waved, the way buddies do. My awaiting girlfriend had been watching this potential ‘hot mess’ from the safety of the BART escalator (smart lady). She asked, ‘what was that all that about, with the flashing lights and the waving?’ I said (in my best puzzled tone), I’m not sure, but I think I just made a friend - and then the world did not end.

I know there are decent police out there working in all of our cities ,it's refreshing to hear your experience.
But we have a long way to go in this country in regards to ridding the police forces of bullies and power tripping persons.

Since I just started reading your blog, I went back to read Chris Rock's rules.

As a minority who fits a certain racial and "security" profile, I have to say "thanks!"

:) At first I was all mad at the injustice of it all!!! Then as I continued reading I had a smile on my face! I felt like oh, thank God the cop wasn't a racist mofo!

and actually that is one of the reasons I relocated to Puerto Rico. many years ago the cops in New York started profiling and becoming very aggressive with anyone not a blue eyed white. Thankfully myself and family were able to leave!

I may not get as much scrutiny as a man but to be honest, I get pulled over at least once a year and so far no ticket or inappropriate encounters. The last cop pulled me over because I mistakenly left the wrong tags on my car. The man took the new tags put them one and told me to have a nice day, ma'am. I am a race woman and so far, me and the man is okay with one another.

"Dude, you okay? Relax.", I said to an officer who pulled me over for speeding at 3am on the 'white side of town'.
(His partner kept his hand on his gun and looked nervous.)
I saw their lights flashing in my mirror and motioned for them to follow me away from traffic on the road.
When the cop asked why I kept driving, I explained that I didn't want to get hit by someone who may be distracted by a traffic stop.
In the end the guy let me go with a warning.
He now waves whenever he sees me drive by.
Most cops are scared and it's just easier to put them at ease.

Yeah, why would a cop patrolling the streets of Oakland all day expect someone he stops to make something up. Probably just has stereotypes he got from his racist parents or something.