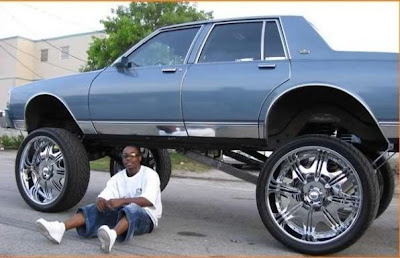 Whatever the trip is with Blacks and big rims must be the analog to Whites and big tires. I have been watching White boys put big tires on trucks since 1975 (when I was a boy!). The big rim thing is relatively new, but deserves its look, with history in mind. In fact, as the picture shows, the mechanics of these urban rigs do not look much different than their 4x4 backwoods cousins.

I believe fat tires came into being to give stability to tall set-ups looking for greater clearance over rural obstacles, stumps, log, swamps, alligators, lawn furniture, abandoned refrigerators, and such. Big rims are an equal testosterone injection for the urban dweller. And just like the cowgirls, the hooptie-girls heat up around this bigness.

So I guess it’s all about sex. I have a friend who even calls the Dodge Ram Truck, the Dodge “Penis”. She claims that this is how the truck looks, so why not call it by the same? For the record, it’s not a Black-thing to have tires/rims that are worth more than the car itself, either. Guys have been upgrading wheels and tires ever since Mags and Ansons first came out to improve performance, a half-century ago.

No discussion would be complete without mention of the hydraulics that our Latino friends add to the mix. I have seen YouTube’s of cars hopping (here) many feet off the ground like an English boxer. When it comes to chest thumpin’ stupidity and automobiles, race don’t matter.

The one thing wrong with big wheels is when the people that buy them spend their money on them while accepting entitlement moneys from state programs.
They will piss their money away on crap like that rather then on necessities and expect the states to pay for their food and medical care etc.

Now if a person has the money left over after the necessities of everyday life then fine, but junk like this is a priority for many that just have to have them to say look at ME!
I have 2000 dollar wheels on a 500 dollar car!

I love your work, but I don't think you'll be able to sell this one. If the expression "you have to draw the line somewhere" has any truth to it, I think poor people buying expensive, impractical rims is about as good an example of it you can come up with. It's not only ridiculous, but it's disheartening to see people who clearly need a lesson or two in resource allocation making decisions so far from productive.

firstly there is no guarantee that ppl who buy rims etc for vehicles are poor to begin with. We all have our own viewpts about buying things "unnecessarily" but we are not here to judge. If you wanna live in a one-bed apt with a 150,000 dollars car with rims das u...yeah u seem to have some priority issues but das on u...i dont think that purchasing items to spruce up ur ride is a racial issue either itz a guy thing we have been conditioned to like things like dat

great post. as a white dude that rolls around on 35" tires I totally get it. Sometimes I'll put up to someone with an equally jacked-up and - for all intents and purposes - pointless raised ride and give them the "what's up" nod.

Sure my truck does have a little more utility behind it, but when rolling around town it's still just showing it off.

So I can easily relate to anyone who loves their ride.

maybe there something to big tires and rims..they didn't get popular until the sex revolution in the 1970s (thats also when girls started losing control and trying to gain it by starving)is silly, but these guys think its the big penis that wins the girl...its not; if anything its the one who protects the woman or girl (theres so few of them today) the guys just think that....I'm a woman

Not a race thing, true. What bothers me about rims and "hooking up your car," is rappers portrayed themselves this way in videos. So, or course all of black America is going to jump on the bandwagon and do the same thing. The other thing that is annoying, is most of the time when you see a black guy with a hooked up car- rims, hydraulics, loud music, tinted windows- they are associated with selling drugs. Believe it or not, most of the time its true. These guys are usually drug dealers. So, big tires and big rims, is not a race thing. But the reason why its so negative when a black person does it, is because those guys are usually the ones with a stash of drugs in their trunk. I'm not being racist. I'm just speaking the truth.

Brother, do what you have to do to keep control of your nuts. Discipline is what it takes to make one of these and I was a creator of a Monster truck from the ground up!

Im white and dont get it, i like my trucks lowered a lil bit, nothin nsane, and my cars raised a bit, ninda like n the 60's