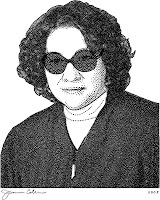 I have no doubt that Judge Sotomayor will make it onto the court, and I do not think this is a bad thing. She is very very smart, unlike some others before her, and a life time appointment tends to coax out the gifted person encased in expedient ambition.

In an earlier post I questioned Sotomayor's no-look decision on the New Haven firefighters, although I now believe she saw it as a no-win situation. Had she sided with the white firefighters, she would have kissed any future high court nomination goodbye. If she wrote an opinion, as is customary, telling why she sided with the City, she would have had to lay out some questionable constitutional footwork, again damning her chance of the high court. By passing the case along an appeal path, in silence, she replaced the no-win with a nolo. The call-out heat from appellate Judge Jose Cabranes was the smallest price to pay.

As for the 'wise Latina' quote, I thought she was saying that her unique experiences, nay hardships, provided a competitive advantage to making good decisions vis-a-vis your run-of-the-mill white guy, who's only lived on a paved street. This may be crude, but it says more about her turning adversity into opportunity, than it does about today's white male. Of course, nothing precludes a white guy, on hard times, from learning a useful thing or two as well.

Bright lights do bring, crack she will not!

So she didn't make any decisions or write any opinions when we can be sure she had an opinion because she knew it would threaten her judicial,
read political, future....

Well she should fit right in to D.C. politics VERY fast..

Judge Sotomayor to thine own self be true. You have failed already by being more concerned with your own welfare than the welfare of the people you are meant to serve.

It would depend on the subject the decision is being made on. She might be ill equipped to handle a decision that that "white male" might have the experience to do well with.

A certain white male may have lived a life that allowed him to be better equipped to reach a better conclusion that she on certain issues.

Her assumptive generalization is very wrong and very presumptive of MANY things.

And we know what assuming can get you.

But she needs to wise up for real and get REAL. If she continues to think she is superior in any way for any reason to anyone any credibility she has will soon be lost and she will be just another token woman on the supreme court.

I agree to an extent I believe she is highly qualified though I question Obama's ulterior motives behind her nomination...is he trying to have a tokenpiece to manipulate rulings or just throw some hispanic flair into a rather mundane group. Personally I think is both than either.

I mentally shrug at Supreme Court nominees, and current justices, because it appears that they decide a number of cases based on feelings - for lack of a better word.

They justify their decisions by referencing the Constitution of foreign countries. Or saying something to the effect that whatever government practice they allow, or disallow, is "accepted / unaccepted" around the world.

I'm at a loss as to how we are supposed to be comfortable with how they come to their conclusions. It comes across as random or chaotic (and senile?) to me. (Kelo / eminent domain decision.)

So, for the justices, the US Constitution is based on what the Supreme Court decides it is, at a given point in time. If we had a proper amendment process, some of their esoteric decisions wouldn't be necessary, because amendments would exist clarifying the language of previous amendments.

However, since I feel our government is dysfunctional and probably broken-beyond-repair, I don't worry about these things.

We really don't know how the appointees will rule until they are seated on the bench.

In context (the text from the Judge Mario G. Olmos Memorial Lecture in 2001,):

Justice O'Connor has often been cited as saying that a wise old man and wise old woman will reach the same conclusion in deciding cases. [...] I am also not so sure that I agree with the statement. First, as Professor Martha Minnow has noted, there can never be a universal definition of wise. Second, I would hope that a wise Latina woman with the richness of her experiences would more often than not reach a better conclusion than a white male who hasn't lived that life.

Let us not forget that wise men like Oliver Wendell Holmes and Justice Cardozo voted on cases which upheld both sex and race discrimination in our society. Until 1972, no Supreme Court case ever upheld the claim of a woman in a gender discrimination case

I have a novel idea: all white juries for whites all black juries for blacks etc.

Who would think that it would take a 'white guy' comment to get a white guy to comment. Rest assured that I have no desire to represent this 'class'. The reality is that suffering transcends race, gender, age, sexual orientation and time. I'm not implying that "I am, therefore I suffer", but part of being human, having a memory, and trying to understanding history and our place in history involves a component of loss and suffering. It doesn't require 'hard times' and it's true for all.

On the bright side, we all have the opportunity to be ... an envious state for those who have preceded us.