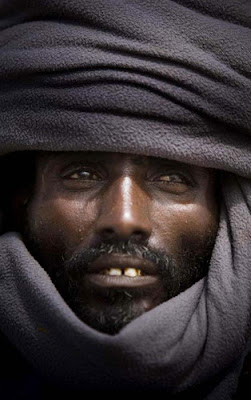 The answer is that he is not, despite the mixed signals that abound, including repeated gaffes from his own mouth. If the Somali pirates, like the one pictured, think that being a country of a religion or culture that Washington bows to, in ceremony, puts them in good stead, they better think again. President Obama may bow to you one moment and turn the snipers on your criminal asses the next. He just proved that this is America damn it, and our culture is that we don’t stand on ceremony!

When Obama bowed to King Saud, I suggested an apology, but never mind, this is way better. While I certainly do not wish death on anyone, theft on the high-seas is one of those ageless crimes like rape and horse-stealing that demand swift rebut. Hello Mr. Pirate, meet Mr. Navy Seal. Yes, that’s a gun you are holding to the head of our man, but I have a green light and can shoot the pimple off a gnat’s ass at 200 meters? Are you listening?

Perhaps wayward Muslims around the world are now considering that Obama is a wolf dressed up like a sheep, rather than an American dressed up like a tourist. This is the beginning of some ugliness, as the Somali’s are vowing to retaliate. The US should expect this, after all, this kidnapping is not personal, it’s tribal business from a country that is about as broken as they get. The Somali rule-of-law-horse is running dead last and this has put them on a collision course with the rest of the world.

The Pirates stepped up their gamesmanship to a US-captained cargo vessel, believing that we would not call their hand. Well, we did, as we should have. Good call Mr. President, good shooting boys, now get ready to fight, and for-god-sakes do not drag this thing out (i.e. keep those KBR types out of the mix).

maybe we should make ourselves aware as to why the piracy started in the first place...

these people need help... maybe this is their way of bringing light to their plight to a wider audience...

WOW!
You are really funny!

A bunch of LOW ass criminals represents muslims?
You are more insight-full than that!

And DO not forget, while yr neighbor is in danger yr Not safe.
We all live in this planet, earth. Each day getting smaller & SMALLER!

Ochyming; I will aid your English. Being Muslim no more facilitates criminality than does being Christian or Jewish, but neither does it exclude anyone from the same. The Somali people no doubt have justified complaints, beginning with the Italians, but trading in lives is a dangerous game where death has a way of sitting at the table.

No need about my English, it is not my main language, and i learned it all by myself, just by reading.
No thanks!

Objectivity worth more that the coffin that is yr blabs blaps wordy.

You wrote:
"The Somali people no doubt have justified complaints, beginning with the Italians, but trading in lives is a dangerous game where death has a way of sitting at the table."For a college educated person, that phase worth going back to high school.

Somalis were colonized as the rest of Africa because of their/our faults, Italians or other europeans owe them/us nothing. NOT intelligent that picking over the shoulder.
In reverse it would have been the same.

Why generalize a bunch of pirates as somalis or muslims?

"Hello Mr. Pirate, meet Mr. Navy Seal. Yes, that’s a gun you are holding to the head of our man, but I have a green light and can shoot the pimple off a gnat’s ass at 200 meters? Are you listening?"

I am as open minded as anyone you will ever meet. But I am tired of these cats snatching dudes out the water and taking thier freedom, their stuff etc. I ain't got no love for them. And any fool that gets his ship took now without a fight is just plain dumb! It's not a Muslim thing as Muslims go. Just like it's not a Christian thing when Christians do wicked things. People can use any shield they want. Wrong is wrong. Muslims are wrong when they F up and use Alah as an excuse as Christians are when they use Jesus' name to be ignorant and hateful. It is what it is.. selective evil! None of it is acceptable!

Ochyming, your lack of English fluency is not a personal failing, but it does seem to prevent you from comprehending this blog or posting intelligible comments. You come off as condescending and insulting (probably on purpose) without contributing anything of substance.

JCC is not saying that all Muslims are like these pirates, but it is a fact that these pirates are Somalis and Somalis are Muslims.

I wonder why you come to an American blog written in English to insult the blog owner and show your contempt for English and Americans. Are there not enough Portuguese blogs to occupy your time?

As far as this situation goes, it's embarrassing that we let it drag out for five days. Somalia has the right to police its waters but this isn't the way to do it. I don't think the US or other nations should get involved, because trying to police the world rarely helps your popularity at home or abroad.

@James C. Collier
Point well taken, Obama has passed his first test, this should should placate the right wingers still mad at the Clinton adminstration for the Black Hawk down mishap.
The Pax American armed forces rivals the Roman Legion, never before has the world seen a fighting force as complex, as the Navy SEALs, Delta Force, an Army Ranger Battalion capable of being deployed anywhere in the world in 96 hours, of course the pirates didn't stand a chance in hell, we arent the French, we are not air dropping a 1mm dollars into the sea!

My response to Ochyming is that you Africans need to get you act together or shut the f**k up!

I wonder what could ever make anyone think that Obama is Islam-leaning...

That Somali in the photo looks like he's wearing Polar-Tech.

I honestly had no idea what I was getting into after visiting this site... being a white dude, and all. and on top of that, a conservative white dude. But this is one of the most entertaining, and dead-on posts I've seen in a long while. Keep it up.