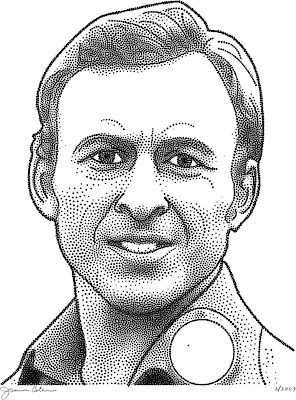 Tiger Woods is back playing golf for now, and those who love him better enjoy it while it last. Those long drives have taken their toll on the knees and we are witnessing the beginning of the end of one of the greatest golfers that ever played the game. But the question of the day is why I believe no black golfer will likely ever replace the spot he’s owned at the top, and why so few will even make the cut to try.

To illustrate this I reach back to a lesser-known Russian sprinter from the Ukraine, Valeri Borzov (featured). Borzov was one lighting-fast white man who briefly held the gold-spot in the sprints at the time of the 1972 Olympics, and long after blacks had come to dominate the fast-twitch muscle-fiber events. But Borzov loved soccer and was a diligent student as well, so his track and field glory faded quickly, mostly by his lack of focus.

As Borzov was a sprinter who happened to be white, Tiger is a golfer who happens to be a physical and cultural admixture, largely black. We made him a hopeful breakthrough of future black professional golfers, but this has not happened, and makes no more sense than Russians expecting that Borzov was the beginning of more than a smidgen of Russian presence in the 100 and 200 meter sprints.

Golf is a game steeped in European culture, just as running and sprinting is steeped in primordial African and African-American culture. Earl Woods was a golf-maniac who got lucky in having a gifted son. Little else mattered than little Tiger with a club in his hand. But be clear that the elder and junior Woods were driven partly by the No Negros Allowed experience, just as the Politburo reveled in a fast Ukrainian crashing the podium gatherings of black Americans, something Hitler promised in 1942, but failed to do.

The up-shot is that we get all excited about first, Obama coming to mind, but the truth is that somewhere on the planet there will always exist persons of any ethnic background and possessing the gifts to unlock any door humanity can present. This is inclusive of different cultures advancing at different rates and to different heights, with disparities that coax out the best and worse. It is also why experiencing other cultures is so vital to progress, compared to living in a shell.

“Only an idiot would ever measure the heights of lovers by their physiques.”

I play the game and I see black guys playing all the time.
I played with three a few years ago in a company tournament and we won the thing.
I play now with a black coworker and a few of his friends when we get the time.
My coworker is one of the most upstanding guys, black or white I have met.
Why the low numbers in the pro ranks, I don't know.
There are plenty of different countries represented in pro golf.

If you like something and want to do it you will but I have a feeling a fair percentage of black youths feel about golf like they feel about white being right and something to be avoided and thinking it's a white man's game so nothing to them.

You'd think Tiger would have opened the door and there have been other great black pro golfers so black youth know it can be done but they still don't attempt it.

BTW I think Tiger has a lot of game and "knee" left.
He says it's better now than ever.

It's going to take some work to get his swing back in order but I wouldn't count him out at all.

I'm sorry this is completely off subject, but I was reading through your archives, and stumbled upon this :
"Second, blacks display a gap in work ethic where they labor for themselves the same way their ancestors worked for the white man, poorly"

Please explain this, I keep re-reading it over and over again in pure disbelief, and the only conclusion I can come up with, is that your saying blacks inherited a "lazy work ethic"-from thier lazy slave ancestors. I sincerely hope that I am wrong.

Anon 9:23, I am happy to clear this up. Throughout the ages, slaves have worked to undermine their masters - a noble and demanded undertaking in my view. But over 400 years in America, this portest subtrefuge became ingrained behavior (in many not all) that lingers even once freedom was accomplished. I do not believe slave ancestors were 'lazy', just smarter than the credit they were given.

I don't play golf but I must agree with you that no black nor white can ever replace the aging tiger on top of the throne. He is a man of the Guinness Book and so it is the same with golf where he is the one and only tiger.

Here is a white guy acting black....and its pretty funny
...he raps the news...

"steeped in European culture" is the kind of ten-dollar phrase that strains hard to be profound but ends up meaning nothing. In reality, golf has no established "culture" at all. Some people play it for the tactile pleasure that a solid shot delivers to the hands; others play it for aesthetics (the scenery); others to be around business contacts and still others just for a walk with some company. The real reason that blacks will not play golf is that blacks will not engage in any activity that does not have a payoff in physical intimidation. Post '80's, this is the regnant value in black culture, crowding out all other considerations. Few whites can know this, of course, since those whose lives consist of going from leafy suburb to glass tower and back never have any significant contact with blacks. Golf is de facto off limits to blacks because it's too damn peaceful. Chris Rock's observation about books applies here. "Afraid niggers gonna steal your money? Hide it in the books. Ain't no niggers gonna get near no books! Books is like cyptonite to niggers!"

"I don't play golf but I must agree with you that no black nor white can ever replace the aging tiger on top of the throne."

Never say never. The world is full of surprises.