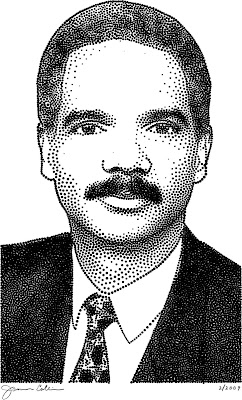 It has always been my understanding that when you call someone a coward, you are picking a fight. After all, a coward is someone lacking spine or backbone to a non-redeemable level. Once I label someone as such, I never, ever, trust them to step up. The label signifies a permanent character flaw. So the question becomes just what Mr. Holder was thinking, in his new role as Obama’s top lawman, when he called Americans cowards?

Who exactly was Holder calling a coward? His words, spoken in a speech for Black History Month, would seem to be aimed at whites. If so, how does this lowest of lowly labels spark a constructive engagement around issues of race, between the races? Answer, it does not. In fact it does just the opposite, pushing recipients further into their closets, where whispering is the only sound you hear.

Now if what Mr. Holder really meant to say is that Americans are fearful to discuss the subject of race across boundaries, he would be correct. In contrast, I submit that ignorance drives fear, rather than cowardice. But even more to the point, Mr. Holder confuses not being a hero with being a coward, and this logic is simply wrong.

There will always be courageous people who take difficult moral positions that include tremendous sacrifice for themselves and their loved ones, and for these heroic people we all should be grateful. There will also be those who pile upon their fears with selfishness and loathing, to the point of earning the label of coward, and they belong with the despised. However, there is the great middle of the people who, with good leadership and guidance, can be coaxed to do the right thing. These people are neither heroes nor cowards, but are the evolutionary status quo inching its way to progress – the yearning masses.

In his short-sightedness, Eric Holder attacked people not behavior - a mistake - and he painted his pejorative with a very wide brush. His message was opposite of that which won the election. I can imagine Obama saying to his attorney general, quietly, that he best leave the words of inspiration to those better suited, while he sticks to upholding the rule of law.

Though I would have put it much stronger, congratulations for denouncing Holder. His speech was nothing less than an attack on white America. For a stronger take on this, see Auster.

How?
He never stated that it was solely on white Americans.
He was addressing the NAACP, BET, Black churches and other Black institutions a well.
Your choice to now play the role of "victim" is as cowardly as are those institutions.

Not very smart to call anyone a "coward." I be Obmam is cringing! To make such a comment reflects insecurity and repressed anger to me.

While the use of the word 'coward' may have been questionable, what he did say does have some merit. As a nation, we are...timid in our discussions about race. It's not just the white race, but it's all races.

I didn't catch his speech but honestly his comment if not aimed solely at whites, has merit.
But if aimed at whites alone he is dead wrong.

From what I see on the news, any news, black groups, the NAACP, etc. won't discuss racism among it's own ranks, probably because they want to continue the falsehood that it doesn't exist.

They only mount attacks when it seems to them a white on black "event" happened, such as the Duke Lacrosse scandal.

But when black on white violence or even black on black violence happens they are part of the silent majority, never uttering a word on these matters.

When the two blacks in Durham, NC kidnapped and murdered the female student body president you never heard a word from the local NAACP, not a peep.
Was her life not worth anything to them because she was white and her killers black?
Had she been black and her killers white you can be assured the local NAACP would have been marching in the streets. What hypocrisy.

Any violence, racism, etc. should be brought to the discussion table.
There is no such thing as only ONE kind of racism.

Why do they hide from that fact?

Whites won't talk about such issues for fear of being sued. It will only come to some settlement when whites have their own organizations fighting for their group rights.

I think there have been enough soft spoken pejoratives when it comes to race in America and specifically white racism.

Black folk have been saying things "nicely" to placate white folks feelings for centuries. Hell I do it and have done it a lot in terms of being tactful and non-specific to the point where they know what i am talking about but it's non confrontational. Still most rebuff the very notion that there is anyting to talk about. I'd say he was correct. To your point however, ignorance is one thing and I will conscede there is some of that out there.. to my point WILLFULL ignorance that one EMBRACES, indeed I say squeezes with the grip of death is yet another.

He said, "we are a nation of cowards."

This means everyone, not just white people. And coward is someone who shrinks away from something. It's not a threat, especially not with the tone he used.

While Obama tends to be diplomatic and downplay race, Eric Holder was blunt, which I think sometimes is needed. You can either react defensively or you can think about his words and whether they are accurate or not. Good for Holder.

Whether directed at whites or blacks, it essentially means the same thing.

In my opinion whites are "cowards" for being afraid of stating facts because even telling the truth will cost us our careers, our friends, and our money in the form of "civil rights" lawsuits.

But in Holder's opinion, whites are cowards for refusing to acknowledge their "ill-gotten" gains from slavery and oppressing the noble blacks they "stole" from africa. Whites are cowards for refusing to admit that we're all closet racists who would join the KKK in a heartbeat if only we could get in touch with the local chapter. We are cowards for not acknowledging that blacks are superior in every way, and have only managed to resist handing over complete rule to blacks for this long by a pervasive conspiratorial culture of anti-black racism.

Blacks are "cowards" for not assaulting whites at every opportunity, not forcefully demanding reparations, not subjugating western culture to their primitive instincts.

This administration came in with an agenda, and this proclamation by Holder is just a warning shot across the bow - that american whites better get in line and accept our new multicultural overlords.