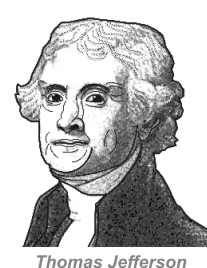 Truer words were never misspoken – except if you are God. The problem is that these words were penned into our constitution not by the almighty, but by mortals, and as if they represented some literal fact, rather than some figurative wish.

This country’s founding fathers (FF), most notably Thomas Jefferson, made a bold declaration to the English that there would be no more of this rule-by-blood nonsense in America. And so as not to water down their argument and still justify slavery, they slipped in the blacks-as-3/5-of-a-man clause – albeit temporary.

Of course, what the FF’s did not consider was how some, no matter their originating backwater, would purposely, or inadvertently, confuse the meaning arising from their constitutional boldness. Whereas, they meant ‘equal in the eyes of God’, it was too often taken as equality of result.

The figurative ideal became the literal notion that if one man is rich, all men should be rich, or an injustice has been done. This is in place of men having a reasonably fair shot at life, liberty, and the pursuit of happiness – but without guarantee.

Many blacks and whites look to the status of blacks, or the poor, somehow as proof of constitutional misapplication. And yes, the rules of this country have indeed been bent, folded, stapled and mutilated in order to reserve benefit for some. But even with this, the opportunity for achievement has remained for those who wanted it badly enough, whatever the promises. It remains for those with the will to sacrifice, not for others, but for themselves and their loved ones. They know there is more to success than someone handing you the win – like wanting it badly enough to take it, freely offered or not.

The chance to learn by dim light, worn books, dull pencils, challenged teachers, crumbling buildings, et cetera, was the only real promise back then, and, though updated, is the same today. The toe wedged into the door becomes passage for the legs, arms, torso and head, but only by unrelenting will. And so it is, sadly for some, truly for all.

Great article! This is true for all Americans. It has been true since Adam and Eve got kicked out of the garden. IF you come into this world thinking you have to work for what you want then you won't have to get over anything when you find out NOTHING (worth having) is handed to you for free!

true, but so many ARE getting things with little or no effort. and those that ARE getting it are shaking their heads at the sorry chumps working hard for it. real.

Who are the ones getting things without little or no effort? The rich because they have it and want to make sure they keep it, the poor (only talking about drug sellers, theives and the like) because they like the lifestyle. I don't really care if those people stand shaking their head at me. At least, what I have (poor or rich) is mine and I didn't have to sell out to get it.