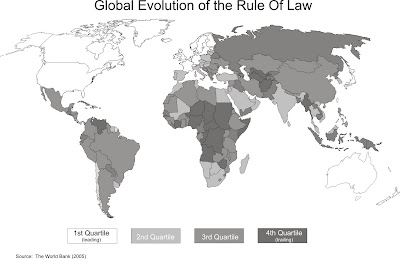 I have been scratching my head over how utterly different are the viewpoints coming out of the Jena Six trial, depending on the skin-color leading the discussion. The majority of blacks, but not all, believe that the defendants should go free, while the majority of whites, again, not all, believe the defendants should be tried at least as juveniles, and potentially as adults. Like the prosecutor in the case, whites also discount the seriousness of the three nooses as the accelerant to the events.

In stepping back from the emotion of the situation, I believe we are in a modern-day confrontation, in part, from the social remains of a disparity in the development and assimilation of the rule of law, as practiced by black and white, dating back thousands of years to both Africa and Europe.

The rule of law can be simply described as the evolving set of rules, or laws, that a society utilizes to govern its citizens with the goal of enhancing social trust, a key ingredient in advancement and competitiveness. The current World Bank index for the rule-of-law closely correlates to a country’s gross domestic product (GDP), level of technology development, and overall industrial ranking and economic strength.

African-American attitudes predictably reflect the influence of evolutionary rule-of-law progress of their locations of ethnic origin (LEO), that being the region of West Africa. By the measurements of the World Bank, West African countries rank, with exception, at the trailing edge of countries advancing via the rule of law. So even as we include for racism as a factor, it still turns out that the greater influence for black progress is a propensity to simply view laws and their benefit differently, with greater influence from historical Africa.

By example, just days ago I was admonished by Eddie Griffin, a black blogger of note, as acting white, because I disagreed, pertaining to Jena, with Mychal Bell’s alleged use of lethal force as a reasonable response to the indignity of a noose hanging over a tree. I suggest that it is our different notions of the rule of law that give encouragement to Mr. Griffin and others to believe it is reasonable to knock someone unconscious over an indignity, and especially one of this magnitude. My assimilation of a majority-influenced implementation of the rule of law, in his mind, makes me more white than black, and a form of enemy. I now understand his perspective.

Griffin’s accusation, similar to Reverend Jackson's accusation to Senator Obama, makes my point most clearly. I am a minority in a country governed by a constitution largely of European ancestry. The standard of behavior, regardless of my preference, is influenced, but not set by me or my history, and any insistence over the democratic majority and their influence will reasonably meet resistance. On average, I believe the rule-of-law works to the benefit of black progress, as does first amendment protection of free speech, and we cannot carve out behavior as outside its jurisdiction when it suits us, even as we rightly press for its impartial application in cases such as Jena.

This is some part of what is going on here.

Addendum: The Trouble with Jena’s Six

Have you considered that many whites simply do not automatically put their faith in the accuracy of MSM news reporting, regardless of topic?

Consider the paths of exposure. Many blacks heard of the Jena 6 several months ago through radio and blogs, fairly well trusted sources. However, many whites learned a distorted version just recently through news media sources, many of which issued retractions within 48 hours of their features. The damage was done.

Also, a rather major movement in white culture was occurring at the same time as the buildup to the Jena march and its immediate aftermath, the release of Halo 3. This video game (of all things) targets the one white demographic most likely to blog and otherwise be vocal in support of the Jena movement. This left the conservatives as the most vocal whites. (I can't say exactly how much this contributed obviously, however I think it significant enough to be considered.)

Two questions to ask now are, "How did the MSM -- virtually en masse -- get such a distorted and easily discreditable version of the events?" and "What version will be presented at the Congressional hearings and how deep will it probe into juvenile records of the defendants?"

Oh heck, let's not ignore the elephant in the living room. Will Bell's ex-girlfriend and his grandmother ever be given a public forum?

Knocking someone out is not hard to do boxers do it all the time, with thick boxing gloves on.

So that means just because the kid was knocked out does not actually mean he was seriously hurt, which he wasn't as evidenced by his short hospital stay.

People seem to be caught up on the whole unconscious thing.

Hmmmm. I have a problem with your presupposition that: "The majority of blacks, but not all, believe that the defendants should go free..."

What do you base that presupposition on? I have been Black a few years now, and am related to and know quite a few other Black people, and of those who know the story of what went on down there in Jena, MOST feel only that charges were excessive NOT that they (the Jena 6) should not face consequence for their actions.

So again, I am curious as to how you arrive to your starting position.

DJBA: I use 'free' in the wide spirit in which it has previously been applied, in "Free The Jena 6". I use the 'but not all' caveat, to acknowledge that some black commentary take your (up front) position of some punishment due, however I hold to my sampling (and it is mine) that free generally means no charges. Further, free does not imply guiltlessness, but rather appropriate response to the allegations of impartiality of authorities.
Specifically, state/federal authorities have thus far declined to press hate-crime or civil rights violations against any whites and this action/inaction further substantiates free, again per commentary I have seen, as no charges/no punishment.

I see where you are coming from. Thank you for the clarification.

When I say Free The Jena Six, I mean FREE THEM.

No ifs, ands or buts.

If someone had been held accountable for the nooses...

Or, the beating of the Black Boy...

Or, the pulling of the shotgun, threatening them...

Then, possibly, we wouldn't have gotten to the point of the beatdown of that White boy.

But, since NOBODY is paying for above crimes....

Hell no, The Jena Six shouldn't be in jail or charged. That White Boy was writing checks his ass couldn't cash, something White folks do all the time. Act big and bad, and when we decide NOT to turn anymore cheeks, then they get religion and call in The Law.

I get tired of folks thinking that The Jena Six beat that White boy because the sky was blue and they didn't have anything better to do that day, and it was some sort of PTSD from six months ago about The Nooses.