White Violence, Navy Seals and the Death of Osama 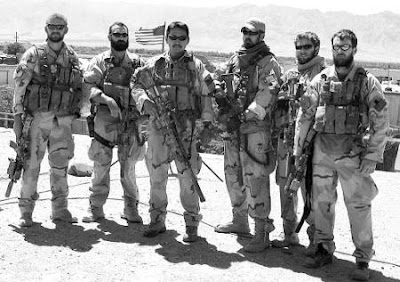 In the shadow of my previous post on black violence (here) and the recent killing of terrorist leader, Osama Bin Laden, perhaps it is appropriate to talk more about violence, specifically non-urban, non-black violence. On one side I feel good that the mastermind of the 9-11 tragedy is gone. On the surface, our government killed him in response to him killing many thousands of Americans and Muslims alike, under his jihadist rhetoric. However, I will always wince when governments sanction and carry-out actions to kill named individuals. It is a slippery slope to be on, considering the strangeness of bedfellows.

The reality of publicly eliminating the practical and/or symbolic leadership of a sworn and deadly enemy brings violence, and its epitome, the taking of a life, front-and-center onto humanity’s stage. Fighting and killing is what we humans do, better than anything else. The Navy Seals are our most elite example of evolved, expert, surgical-level, violence, but in the end it is all the same - the best killers that technology has to offer, killed a man. Killers, it is what we are.

I have a good friend whose young son is training in hopes of joining the Seals as an officer. On one side, I am cheering the kid on, because he is an ace and wants to defend his country in this way. On the other hand, I shudder to think of him as the killing machine the Navy will make of him. The sacrifice he will make for our benefit will be great. Those Black Ops guys must leave their souls at the gates of hell, less they come to think of themselves as gods. They have a target that they kill, retrieve, or blow up, without any consideration beyond the order. It has to be that way. FTR, Bin Laden is dead because that is what it said on the order, period.

We should know this about the killing, it cannot stop. It will not stop. Us or them. Them or us. Our planet is getting smaller with each smartphone. The human infestation continues, with a competition for dominion increasing from the leading to trailing edges of global society. It is happening in places like Kenya, and Tibet, New York, and New Zealand - by governments and street-thugs alike. I guess this is progress, to somebody.

UPDATE: Here is what the White House had to say about the timing of the Seal Team 6 rescue on the same day as Obama's 2012 State of the Union address. You be the judge.

So in other words the violence that Whites engage in (which is actually the cause of so called terrorism and produces people like Bin Laden) is always justifiable and righteous. All in the name of White supremacy and imperialism right Mr. Collier??

Jah, No. I am actually equating all violence, leading and trailing edge, as simply leading to more violence, regardless of intent, good or otherwise.

"We should know this about the killing, it cannot stop. It will not stop. Us or them. Them or us. Our planet is getting smaller with each smartphone. The human infestation continues, with a competition for dominion increasing from the leading to trailing edges of global society."


Brilliant post Mr Collier! and what a chilling and sobering thought this one. sadly I have to agree with all you've said. One would hope not, but it has been that way up to now across the millions of years that planet earth has existed, and as you well say "it will not stop" :((

@jah, wow man, how did you interpret that from his post? Also, good job working in blaming the white man for terrorism as well.

Agree with Collier and Desertflower that humans, the mammals that we are, are violent. Hopefully someday we'll move beyond it!

James........The world has always been this way. Technology just the information easier to get. Do not be fooled.

Eventually, criminal violence will become so rampant in the U.S. that it will have to be quelled by military violence.