Why Are Black People Black-Skinned? 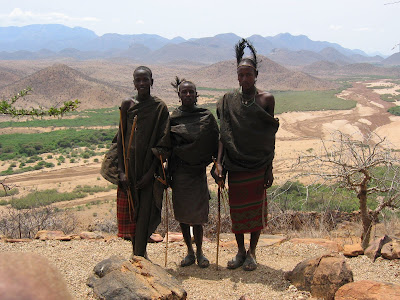 While asking the question ‘Why are White People White?’ (here), I touched on that black people are black by the same mechanism. However, my explanation was too brief, and the question deserves its own full answer. Keep in mind this evolutionary cheat-sheet: first, there was panting and hairiness, and then came limited sweating and hairiness, and now we have full-body sweating and no hair (little hair).

To begin, earlier hairy primates, or proto-humans, living in Africa were less efficient at dissipating the body heat that resulted from strenuous exertion (hunting, gathering, and avoiding predators). Panting is the way most mammals cool themselves, rather than through sweating. As an evolutionary alternative, sweat glands appeared first over hairy bodies and then over less-hairy bodies, allowing for rapid cooling and quick evaporation. Evaporative cooling pulls heat away, countering the insulating effect, whereby the moisture stays on the skin, trapped by hair, and increasing in temperature from both the sun and internal exertion.

Indeed, sweat glands were an improvement over panting, allowing for greater exertion, but there was another hurdle. Full-body hair on proto humans grew out of ‘white (non-pigmented) skin’ underneath, in combination to regulate Vitamin D(3) production, for bone and reproductive health. Without the hair to block the sun, the skin had to take on this critical task by itself, via melanin production, thereby making the evolutionary case from fully covered, dark haired, white-skinned, proto-humans into hair-less dark-skinned humanoid descendants. Viola, black people!

I've always been baffled by this part of our emergence. Feeling more enlightened each day. Thanks!

what...so white people became black? Then why are there White People?

Anon 2:34, Let me simply. Early proto-humans had full-body hair over 'white' skin, in Africa. They loss their hair and developed sweat glands, to gain physical endurance. Their bare skin darkened, to regulate Vitamin D production. When they migrated north, out of Africa, their skin lightened to white, again, to regulate Vitamin D production, on less sun. Skin pigment is genetically adaptable to the environment and bodily requirements.

With all due respect sir that is just not true. Black people, Africans, are the same today as they were billions of years ago. Primates or proto-humans as you called all came from the genes or the essence of black people and our skin color and our hair contain the evidence of this. In fact, the way you get straight hair is to pull (at its essence) kinky hair and the way you get white skin is that you dilute or stretch at its very essence the genetic structure that produces black skin pigmentation. I like using the watermelon to illustrate this point. You have seeded and seedless watermelon, but a seedless watermelon is not seedless at all it contains white seed instead of black or brown ones. And you get the white seeds by manipulating the genes of the watermelon. Needless to say this process takes time and that each time the seed will become lighter or whiter until you get a black or brown seed that produces a fruit that has white seeds. Essentially, the same process is use to dilute black skin until it become white or whiten. This process will produce brown people, red people, yellow people, and white will keeping in the Black people. Black people sir have been on the this planet since the beginning of the planet in the same physiological and biological make up that they have today. Now I am talking "Africans" not African Americans. But, white folk has a recorded history of just over 6,000 years; the process that you explained obviously took over 6,000 if not how did it take? The whites have no indication in their historical accounts that is indicative of what you claim. What is your source? I think that when you make statements like this you should site sources. God Bless.

Jordan, the reference you seek is in the previous post on white skin. SKIN: A Natural History, by Nina Jablonski PhD.

The evolution of dark skin is linked intrinsically to the loss of body hair in humans. By 1.2 million years ago, all people having descendants today had the same receptor protein of today's Africans; their skin was dark, and the intense sun killed off the progeny with any lighter skin that resulted from mutational variation in the receptor protein.[4] This is significantly earlier than the speciation of Homo sapiens from Homo erectus some 250,000 years ago.

Skin cancer as a result of ultraviolet light radiation causing mutations in the skin is less common among people with dark skin than it is among those with light skin.[5][6] Furthermore, dark skin prevents an essential B vitamin, folate, from being destroyed. Therefore, in the absence of modern medicine and diet, a person with dark skin in the tropics would live longer, be healthier and more likely to reproduce than a person with light skin. White Australians have some of the highest rates of skin cancer as evidence of this expectation.[7] Conversely, as dark skin prevents sunlight from penetrating the skin it hinders the production of vitamin D3. Hence when humans migrated to less sun-intensive regions in the north, low vitamin D3 levels became a problem and lighter skin colors started appearing. White people of Europe, who have low levels of melanin, naturally have an almost colorless skin pigmentation, especially when untanned. This low level of pigmentation allows the blood vessels to become visible which gives the characteristic pale pink color of white people. The loss of melanin in white people is now thought to have been caused by a mutation in just one letter out of 3.1 billion letters of DNA.

Anon 11:05, the key factor that is missing from your offering is that the outer layer of our bodies, especially the skin, is genetically adaptive (labile) to the environment, specifically sun intensity at different latitudes. So, the mutation you recognize was not happenstance, as you imply, rather it was predictable to way our bodies work and essential to our survival as we moved around the globe.