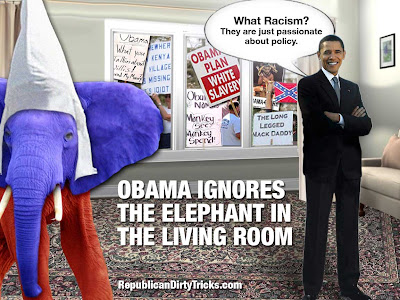 Blacks are going to need some time to adjust to being in the ‘race zone’, that emerging place where the value of ignoring the bulk of racism approaches the value of fighting it. Whites are not going to make the transition easy, either. On one hand, they voted a Black man into the White House, all the while still able to toss the n-word around like a Sunday football. In some twisted way, this intersection might represent progress. In the race zone, one can be racist and not racist at the same time.

By example, Obama got elected, but in the recent health care debate Black Washington lawmakers were called nigger, and spit upon by Whites (here), reminding us rudely, of the old days. The nuance is that even in a post-up racial America, acting racist is a good way to draw attention and belittle your adversary, regardless of how you really feel. They would say just because someone calls you a nigger, it doesn’t mean they really ‘David Duke-hate’ your ass. Maybe they're simply trying to psyche you out.

Thirty years ago, in college, a very good friend and roommate, whom I had known since middle school, got bent out of shape when his cute blond cousin asked me out on a date. He hated her previous White boyfriend, who was abusive, but still preferred that dude to me. He easily reconciled me as his best friend, but not good enough for his cousin. I could strangely see his point.

On one side, my friend had my back, but he also carried a legacy that our friendship could not simply shrug off. When pushed to the mat, the idea that his cousin might try to jump me made race come out hard and ugly. The people who don’t like Obama can’t help but call him racial names during their mouth-foaming protests. Blacks are late to the stick-n-stones party, because slavery and Jim Crow were the real deal, not just words. Under the old rules, somebody could get hurt – still can.

Looking back, my best friendships are where race differences are explicit, including a lot of ‘you people’ this and that, designed to ‘keep it light, real, and up front’. But it's also about knowing who really has got your back, regardless of color. For better or worse, the race zone is where most of us are headed, ready or not.

James...I disagree with the premise of this post, which is nice because I think you are spot on most of the time and have been with you for at least a couple years. I love your ideas and love to read your thoughts on the many matters you cover, but this posting smells of pointing out a few racist pigs and lumping them in with the masses. I would like to assure you that your ole' best friend is a dying breed, getting smaller and smaller as time goes on.

How many millions voted for Obama? 60+ MILLION? And a few bad racist apples at a rally dropping n-bombs, spoil the apple pie?

You point to bad behavior of a few ignorant idiots, but I would love to see more pointing in the direction of a generation of all skin colors born 30-years ago, that could give the proverbial "two $hits" about the color of your skin and more about the content of your character. I assure you that not liking Obama's policies doesn't make you a racist. I don't like everything he is doing, but it sure has zilch to do with his skin tone.

It started with my mom, who taught me we are all equal and I now share that with my children and their children's children. Its progress and we are headed in the right direction. I can assure you that acting racist is not a good way to draw attention to your cause and I am unsure who this appeals to in the under 40 crowd.

LC9: Obama got elected because we crossed a threshold into the race zone. He is still playing this game. But racial distinctions exist, as disparities of behavior and results go unexplained (or poorly described). I appreciate your upbringing and optimism, but we are still a long way away.

Not a single shred of evidence exists proves that people were celled the n word at those rallies. All IMPARTIAL witnesses reported nothing of the sort.
The so called spitting looked to be totally accidental if it occurred at all.
In fact many of the people that said things were done turned down the chance to tell their stories nationally.
And lets not forget those same lawmakers walked through the rally on purpose to try to get a rise.


As far as the n word if it so bad then why do blacks commonly call each other that like it is some term of affection.......
IF nobady should say it, NOBODY should say it, period.
What hypocrisy.

I believe that most people deep down are racists. And it is certainly not a “trait” that can only be found in whites. Blacks, Arabs, Indians and Chinese are just as racists as Caucasians.